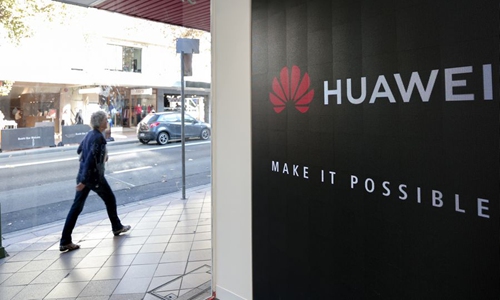 A pedestrian walks past a Huawei store in Sydney, Australia. (Photo: Xinhua)

Domestic chipmaker Semiconductor Manufacturing International Corp (SMIC)'s planned IPO on the Sci-Tech Innovation Board may give it a much-needed shot in the arm to speed up research and development into 7-nanometer chips and assume the role of leading player Taiwan-based TSMC in supplying Huawei in the coming two to three years, industry insiders say.

Facing a US ban that could cut off supplies from TSMC, SMIC - with its present14-nm mass production capacity - is still unable to equip Huawei's state-of-the-art products. This means that in the short term, Huawei needs a back-up plan to resolve crucal supplies.

Hong Kong-listed SMIC plans to raise about 20 billion yuan ($2.8 billion) through its secondary listing in Shanghai, the company said in a prospectus on Monday. The announcement came on the heels of the US' intensified crackdown on Huawei by restricting its sourcing of chips with US technology.

The IPO proceeds will be used for its 12-inch chip project, supplementing its cash flow as well as providing reserve capital for other advanced R&D projects, the foundry company said. The IPO prospectus revealed that SMIC has started R&D on its second-generation 14-nm FinFET manufacturing technology.

"Once the project is completed, SMIC's manufacturing level could inch closer to 7-nm scale," Ma Jihua, a veteran industry analyst, told the Global Times on Tuesday. With the capital injection, SMIC could march into the production of 7-nm and even 5-nm wafers in the coming three years, Ma said.

The key takeaways from SMIC's IPO prospectus are first, that it will invest 8 billion yuan in its 12-inch SN1 chip, which industry insiders believe will elevate its chip manufacturing ability to a more advanced level, smaller than 14-nm.

And, there will be rising investment from other state players, which shows that the "national team" is deploying the resources on hand to fully support the chipmaker's technological breakthrough amid a relentless US crackdown.

SMIC made a splash last year by delisting from the New York Stock Exchange at a time when the US government tightened crackdowns on Chinese tech companies.

In May, SMIC secured $2.2 billion investment from Chinese state-run investors.

SMIC began mass production of 14-nm chips in 2019. Company executives said that orders for such products generated 1.3 percent of the company's revenues in the first quarter, according to a recent earnings call.

The company's next-generation foundry node known as N+1, which boasts a conspicuous improvement in performance and logic density, has made steady progress in R&D.

TSMC, the world's largest contract chipmaker and a key supplier for Huawei, has perfected 7-nm production and is on its way to developing 5-nm production capacity. The company has recently denied market rumors that it halted new orders from Huawei under mounting US pressure.

"Faced with US bullying, Huawei is going all out to cultivate new business partners that are good enough to replace TSMC in case the latter cuts chip supplies some day," an industry source told the Global Times on the condition of anonymity.

However, Huawei is still relying heavily on TSMC's advanced techniques for its high-end devices.

Analysts pointed out that SMIC's 14-nm technique could only supply Huawei's low- and middle-end devices, such as the Honor series phones. As for high-end devices such as the P and Mate series, which contribute the bulk of its profits, Huawei still has to source chips for most of them from TSMC.

"Huawei's high-end strategy resonates with Apple's. Profits from the high-end sales sustain its huge investment in R&D. If Huawei had to pare back its high-end line-up or use 14-nm chips in high-end products, its profit margin will wind down," Ma said.

Media reports hinted that Huawei has come up with a plan B to mitigate the effect of the US ban. Ma also suggested that Huawei could cooperate with Samsung and purchase chips from it.