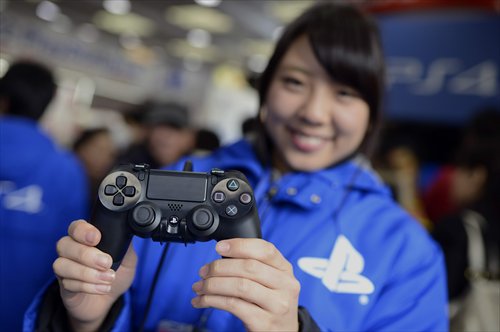 A staff member shows off a Sony PlayStation 4 console at an electronic product store in Tokyo, Japan on February 22 2014. (Photo: CFP)

Japanese conglomerate Sony is reportedly planning to expand its presence in the fast-growing anime market in China, as the company faces tough times in its other businesses including smartphones, and as China vows to improve protection of intellectual property rights (IPR).However, the company, despite its expertise in anime, will need to come up with better products to stay ahead amid rising competition in the Chinese market, an analyst said Sunday.Aniplex, Sony's anime unit, will turn its office in Shanghai into a subsidiary that will help expand the company's presence in the Chinese market through setting up an online shop to sell products featuring characters from popular anime shows and working with Chinese companies to produce anime for the Chinese market, the Nikkei Asian Review reported on Friday.Aniplex registered a subsidiary in Shanghai in January, after some of its products including smartphone game Fate/Grand Order became popular in China, according to information obtained by the Global Times Sunday.The subsidiary will focus on expanding rights licensing business and exploring the development of local intellectual property.Sony did not respond to a request for comment as of press time Sunday."The real intention behind this move is that Sony wants a piece of the Chinese market," Wen Shijun, principal researcher of the cultural and media industry in the Research and Development Center under Beijing-based Cinda Securities Co, told the Global Times on Sunday.Wen said that China's anime market has been growing fast in recent years because more and more young fans are willing to pay to watch animated films in the theaters.In 2018, China's anime market reached 174.7 billion yuan ($26.06 billion), increasing 13.7 percent from 2017, according to data from China market research agency iResearch. Driving that growth was a base of nearly 220 million anime fans online, the data showed.However, fierce competition is also emerging in the Chinese anime industry, with both foreign and domestic companies such as US-based Walt Disney and China's Alpha Group competing for market share."In this industry, there isn't one company that dominates the market. It depends on the specific product. It is possible that some small companies could also succeed if they make great products," Wen said. For Sony to succeed, it will also need to come up with better animated films for Chinese fans. Behind Sony's move is also better protection for IPR in China, the Nikkei Asian Review report noted.China has significantly enhanced IPR protection through tougher enforcement of laws and regulations and crackdowns on IPR violations, as part of the country's broad effort to improve business conditions and encourage innovation.Wen said although better IPR protection might have played a role in Sony's decision, "I think the most important reason is the vast Chinese market."Sony has been having some tough times in other businesses in China. In March, it was reported that the company planned to shut down its smartphone plant in Beijing to cut costs for its money-losing handset business.