A free trade zone (FTZ) in Shenzhen, South China's Guangdong Province, has set up a 5G network that covers the whole zone, becoming the first FTZ in China to see the deployment of the next generation of wireless technology. 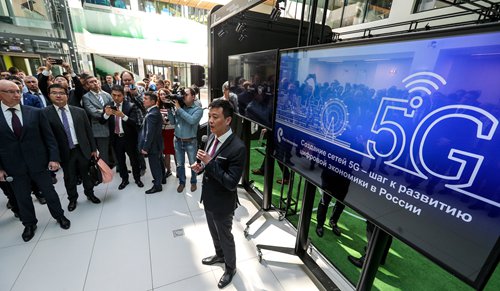 A Huawei representative makes a speech at the opening ceremony of the new-generation 5G network test zone in the town of Innopolis in Tatarstan, Russia. This is a substantial step forward after Huawei signed a partnership deal with Russian operator Rostelecom and its subsidiary Tattelecom to develop 5G in Tatarstan. Huawei provided 5G Massive MIMO equipment for the project in the zone. (Photo: VCG)

China Unicom's Shenzhen branch has installed 111 5G base stations in the China (Guangdong) Pilot Free Trade Zone Qianhai and Shekou Area that enable the full coverage of 5G networks in the FTZ, the Economic Daily reported.

The 5G network, which supports large-capacity intelligent optical transport networks for the government and enterprises, has reached a peak bandwidth speed exceeding 1.5 gigabits per second, with ultra-low latency of less than 8 milliseconds in the ecosystem.

Using 5G can significantly increase the efficiency of logistics and decrease its cost in the FTZ, Fu Liang, a Beijing-based independent telecom analyst, told the Global Times.

"One of the most anticipated benefits of 5G is the Internet of Things, and in the FTZ, 5G can be applied to several domains, such as creating location management systems, facilitating inventory tracking and warehousing," said Fu.

"With 5G technology, it can be expected that freight shipping and deliveries will be less costly and customs declarations can be more efficient with faster electronic declarations," Fu said.

Shenzhen is known for its technological edge and is one of the first trial cities for 5G commercialization in China. Construction of 5G infrastructure is going full swing in Shenzhen and it is expected to be put into commercial use by 2020, news website sina.com reported. More than 7,000 5G base stations will be established in the city in 2019, making the city one of the world's top 5G-enabled innovative cities.

Apart from China Unicom, other major telecom carriers are all working to speed up 5G deployment and commercialization. In 2019, China Mobile's investment in 5G is expected to hit 17 billion yuan ($2.53 billion), while China Telecom plans to invest 9 billion yuan ($1.34 billion) in 5G deployment, according to media reports.

On Wednesday, Hao Peng, an official of the State-owned Assets Supervision and Administration Commission of the State Council, which oversees state-owned enterprises, urged China's telecom operators to seize opportunities to develop 5G technologies to maintain China's global leading position in 5G technology and build a cyber powerhouse. Hao made the comments during a research trip to China Mobile, thepaper.cn reported.