Southern right whales off the coast of Western Australia mask their calls with the sound of crashing waves in order to remain undetected by predatory killer whales, a study has revealed on Friday.

A Southern right whale and calf swim in the ocean at the Head of Bight whale watching center on October 3, 2011 in Nullarbor, Australia. (File Photos: VCG)

While it was already known that humpback whales will "whisper" to their calves, researchers wanted to find out how southern right calves – which at between five to eight meters are still vulnerable to attack – go unnoticed.

Led by Mia Nielsen from Aarhus University in Denmark, an international team of scientists attempted to attach sound recording tags to mother-calf pairs as they rested on the surface.

"One of the initial challenges was getting to know the whales in our study area," Nielsen said. 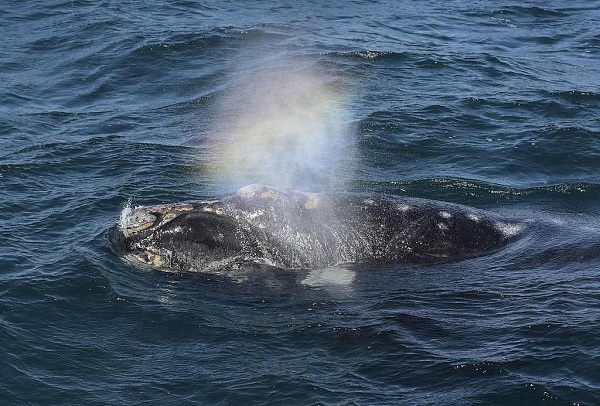 Southern right whales off the coast of Western Australia mask their calls with the sound of crashing waves in order to avoid predatory killer whales, said a study.

The number of Southern whales in the area is quite low and the researchers were surprised to find when they eventually located the mother-calf pairs, they were in the more turbulent water closer to shore.

Once they had found the whales, the team also faced the challenge of the tags detaching due to the activity of their playful hosts.

"Southern right whales are very physical with each other, the calves spend a lot of time rubbing against the mother and rolling over her back, tail and rostrum," Nielsen said.

After eventually recording up 63 hours of "conversation" between the mother-calf pairs, the team noticed that rather than communicating continuously, the whales would only call to each other less than once a dive.

They also noticed that the sound of the "grunts and moos" that the whales made was very low in volume.

The combined effect of the pounding waves and the quiet and limited communication meant that the giant mammals could not be heard outside of a few hundred meters.

This led Nielsen and her team to conclude that the whales were in fact lowering their voices and deliberately masking their noise with the sound of crashing waves so as not to alert nearby predators.