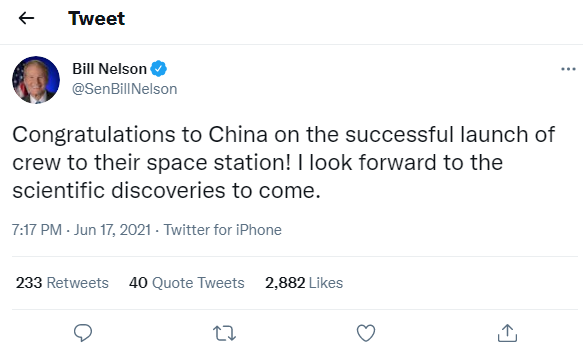 International agencies, experts, and space enthusiasts worldwide marveled at the new milestone in China's crewed space missions as they sent their congratulations.

"Congratulations to China on the successful launch of crew to their space station! I look forward to the scientific discoveries to come," Nelson said in the statement.

Knowing the landmark progress in China's manned space expeditions, SpaceX founder and CEO Elon Musk posted on his Twitter account: "This is a great achievement!"

European Space Agency also extended its congratulations on its official Twitter account. "Congratulations to the China National Space Administration on the launch of three 'taikonauts' on their Shenzhou-12 mission to the Tianhe (Heavenly Harmony) space station."