Spacewalking astronauts hustled through battery hookups outside the International Space Station on Friday in a major upgrade of the solar power grid.

NASA's Christina Koch and Nick Hague successfully installed a set of new and stronger batteries, continuing replacement work that began a week ago. 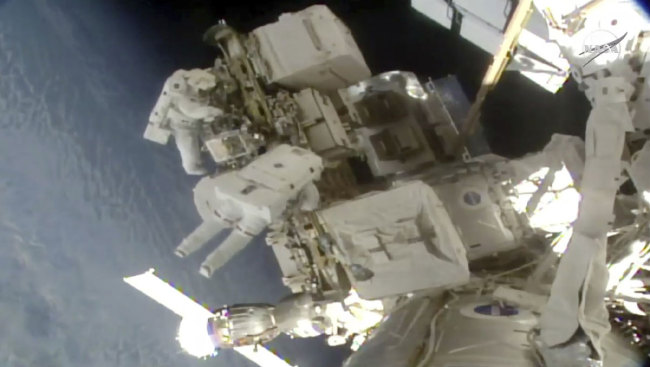 This photo provided by NASA, astronauts Nick Hague and Christina Koch float outside the International Space Station, Friday, March 29, 2019, a week after the first spacewalk to install new and stronger batteries for the station’s solar power grid. (Photo: AP)

It wasn't the team NASA envisioned. Koch was supposed to go out with astronaut Anne McClain for the first all-female spacewalk. But the lineup was changed because there weren't two medium suits readily available for the women. After NASA took heat for the switch, McClain explained that the decision was based on her recommendation.

"Safety of the crew and execution of the mission come first," McClain, an Army aviator, said via Twitter this week.

Koch — the 14th woman to conduct a spacewalk — arrived at the space station two weeks ago along with Hague. McClain, who last week became the 13th female spacewalker, has been on board since December. More than 200 men have walked in space.

The space station's outdated nickel-hydrogen batteries are being replaced with lithium-ion batteries, a lengthy process spanning years. These batteries store power collected by the solar wings and keep the outpost running when it's on the night side of Earth. The big robot arm at the space station took care of the heavy lifting in advance, removing the old batteries and placing the new ones in the empty slots earlier this week.

Besides attaching three fresh batteries, Koch and Hague disconnected one of the three installed last week because of higher voltage than expected. It will be replaced by two old-style batteries until a spare arrives. Running ahead the whole time, the astronauts even squeezed in some extra chores before their 6 ½-hour spacewalk ended.

"Everybody's very impressed by how much we achieved today," Mission Control radioed. "You guys rock."

McClain pulled out of Friday's spacewalk when she realized that the medium suit she used last week fit her best; she was supposed to switch to a large. Koch also takes a medium. While another medium spacesuit top is available, it would have taken 12 hours to get it ready — time NASA did not want to spend given all the other station activity.

All first-time space fliers, McClain, Koch and Hague are members of NASA's Astronaut Class of 2013, the first to include equal numbers of women and men.

A third spacewalk is planned for April 8; McClain will go out with Canadian David Saint-Jacques.

The 250-mile-high station is also home to two Russians.