WASHINGTON, Aug. 2 (Xinhua) -- The SpaceX Crew Dragon "Endeavour" spacecraft carrying two NASA astronauts parachuted to a splashdown in the Gulf of Mexico off the coast of Florida on Sunday, completing a two-month mission to the International Space Station (ISS). 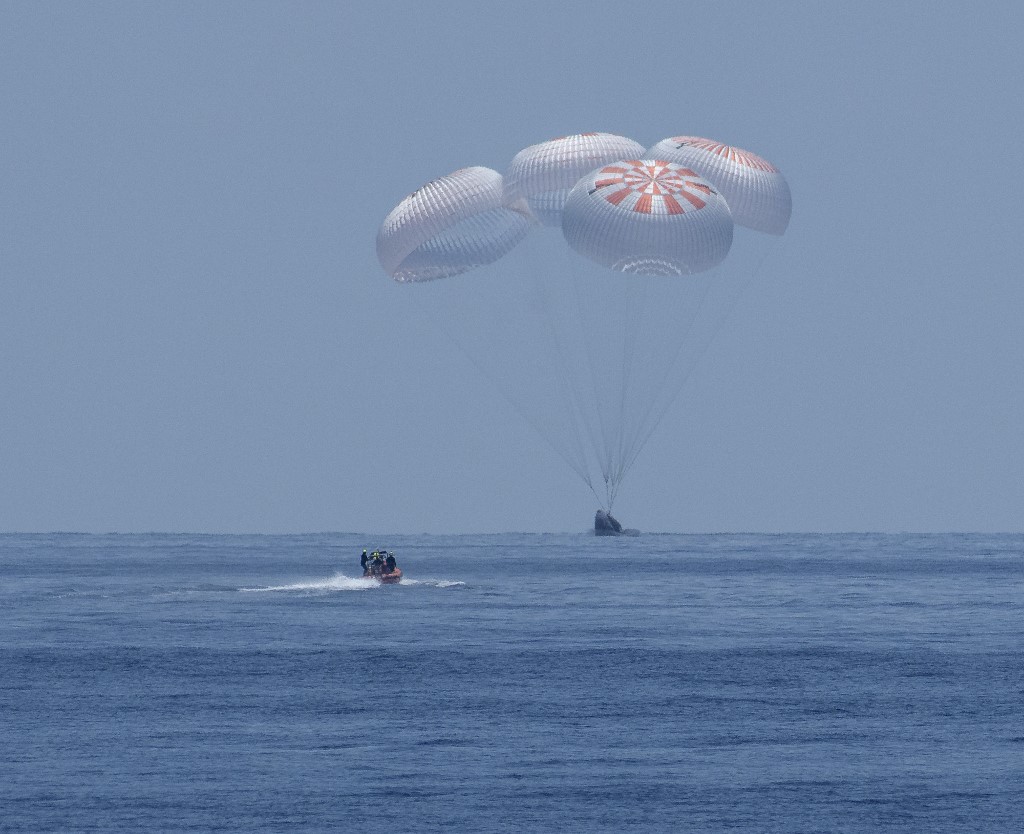 This NASA photo released August 2, 2020 shows the SpaceX Crew Dragon Endeavour spacecraft as it lands with NASA astronauts Robert Behnken and Douglas Hurley onboard in the Gulf of Mexico off the coast of Pensacola, Florida. (Photo: AFP /NASA/BILL INGALLS/HANDOUT)

The spacecraft splashed down off the coast of Pensacola, Florida at 2:48 p.m. EDT (1848 GMT) Sunday.

The SpaceX recovery vessel GO Navigator was waiting at the landing zone. The recovery teams reached the SpaceX Dragon capsule and gathered the parachutes in the water.

SpaceX engineers did a purge of vapor fumes around the Dragon Endeavour to ensure the safety of the crew when they opened the hatch.

The spacecraft hatch was later opened. NASA astronauts Robert Behnken and Douglas Hurley were safely brought out of the capsule.

The return began at 7:35 p.m. EDT Saturday, when the Crew Dragon spacecraft autonomously undocked from the ISS Harmony module.

The return of the test flight with the two astronauts from the ISS marks the first splashdown of an American crew spacecraft in 45 years, said NASA.

It also wrapped up the test flight for the first commercially owned and operated crewed spacecraft under NASA's Commercial Crew Program.

"It was an honor to witness history as @NASA and @SpaceX launched American astronauts on an American rocket from American soil to the @Space_Station in May. Today, we welcome home @AstroBehnken & @Astro_Doug! On behalf of a grateful Nation, thank you!" U.S. Vice President Mike Pence tweeted.

Astronauts Behnken and Hurley took off from U.S. soil on May 30, riding aboard Crew Dragon spacecraft in a historic test flight to the ISS. They arrived at the ISS in the Crew Dragon on May 31, where they performed tests on Crew Dragon in addition to conducting research and other tasks with the space station crew.

The mission, dubbed Demo-2, is the first crewed launch to orbit from U.S. soil since NASA's shuttle program ended in 2011, and also the first-ever manned space launch by a private company, ushering in a new era of U.S. space exploration.

This is SpaceX's final test flight for NASA's Commercial Crew Program and will provide critical data on the performance of the Falcon 9 rocket, Crew Dragon spacecraft, and ground systems, as well as in-orbit, docking and landing operations, according to NASA.