SpaceX launched a load of supplies to the International Space Station on Saturday following a pair of power delays.

A Falcon rocket raced into the pre-dawn darkness, carrying a Dragon capsule with 5,500 pounds (2,500 kilograms) of goods. This recycled Dragon — which is making its second space trip — is due to arrive at the orbiting lab Monday. 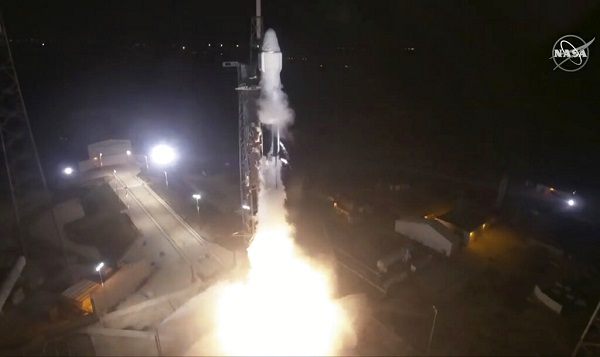 In this image taken from NASA Television, a SpaceX Falcon rocket carrying a load of supplies lifts off from Cape Canaveral, Fla. Saturday. May, 4. 2019. (Photos: AP)

The delivery is a few days late because of electrical power shortages that cropped up first at the space station, then at SpaceX's rocket-landing platform in the Atlantic. Both problems were quickly resolved with equipment replacements: a power-switching unit in orbit and a generator at sea.

Minutes after liftoff, SpaceX landed its brand new, first-stage booster on the ocean platform a mere 14 miles (22 kilometers) offshore, considerably closer than usual with the sonic booms easily heard at the launch site.

"Dragon is now officially on the way to the space station," the SpaceX launch commentator announced once the capsule reached orbit and its solar wings unfurled. "Until next time, may the fourth be with you."

The booster should have returned to Cape Canaveral, but SpaceX is still cleaning up from the April 20 accident that destroyed an empty crew Dragon capsule. 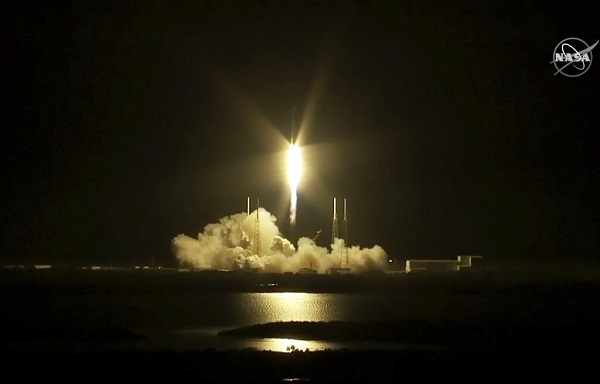 In this image taken from NASA Television, a SpaceX Falcon rocket carrying a load of supplies lifts off from Cape Canaveral, Fla. Saturday. May, 4. 2019.

Earlier this week, Hans Koenigsmann, a SpaceX vice president, said the company still does not know what caused the empty capsule to burst apart in flames on a test stand. The capsule's SuperDraco launch-abort thrusters were just a half-second from firing when the blast occurred.

This first crew capsule had completed a successful test flight, minus a crew, to the space station in March. SpaceX intended to refly the capsule on a launch-abort test in June, ahead of the first flight with astronauts on a new crew Dragon. The schedule is now up in the air, as SpaceX scrambles to identify and correct whatever went wrong.

SpaceX has been restocking the station since 2012.

This latest cargo Dragon — making the company's 17th shipment — is carrying equipment and experiments for the six space station astronauts, including an instrument to monitor carbon dioxide in Earth's atmosphere.

The California-based company is also under contract with NASA, along with Boeing, to transport astronauts to the space station. It's unclear whether these commercial crew flights will begin this year, given the Dragon accident and Boeing's own delays with its Starliner capsule.

Astronauts have not launched from Cape Canaveral since the last space shuttle mission in 2011, instead riding Russian rockets at a steep cost to NASA.