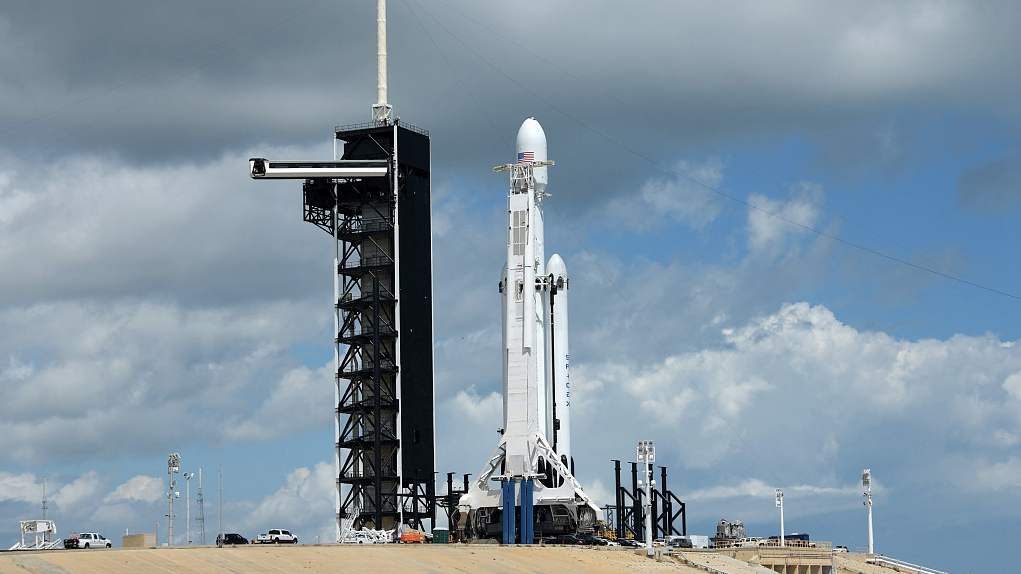 A SpaceX Falcon 9 Heavy rocket stands ready for launch from Complex 39A at the Kennedy Space Center, Florida on April 10. 2019. (Photo: VCG)

SpaceX postponed Wednesday what would have been its first commercial launch with the Falcon Heavy rocket, citing strong wind in the upper atmosphere.

The next window for the mission is Thursday, the company said.

The rocket is to carry a Saudi satellite operated by Arabsat, a year after sending founder Elon Musk's red Tesla roadster into orbit as a test.

The Falcon Heavy had been scheduled to lift off from the Kennedy Space Center in Florida at 6:36 pm (2236 GMT) and place the six-tonne Arabsat-6A satellite into geostationary orbit about 22,500 miles (36,000 kilometers) above the Earth.

Because of the winds, this was later pushed back by about two hours, to the very end of the launch window.

Now it has been scrapped until Thursday.

SpaceX has two operational rockets: The Falcon 9, which with 21 launches in 2018 dominates the US market, and the Falcon Heavy, which as its name suggests is designed to lift much heavier payloads into more distant orbits.

It consists of the equivalent of three Falcon 9 rockets combined, tripling its thrust. SpaceX will attempt to re-land the rocket's three boosters.

In its first launch, in February 2018, a dummy dubbed Starman was placed behind the wheel of Musk's roadster, which is currently orbiting the Sun somewhere between Earth and Mars.

Since then, the US military and private clients have signed contracts for Falcon Heavy launches, and NASA has raised the possibility it may use the rocket for its planned missions to the Moon.