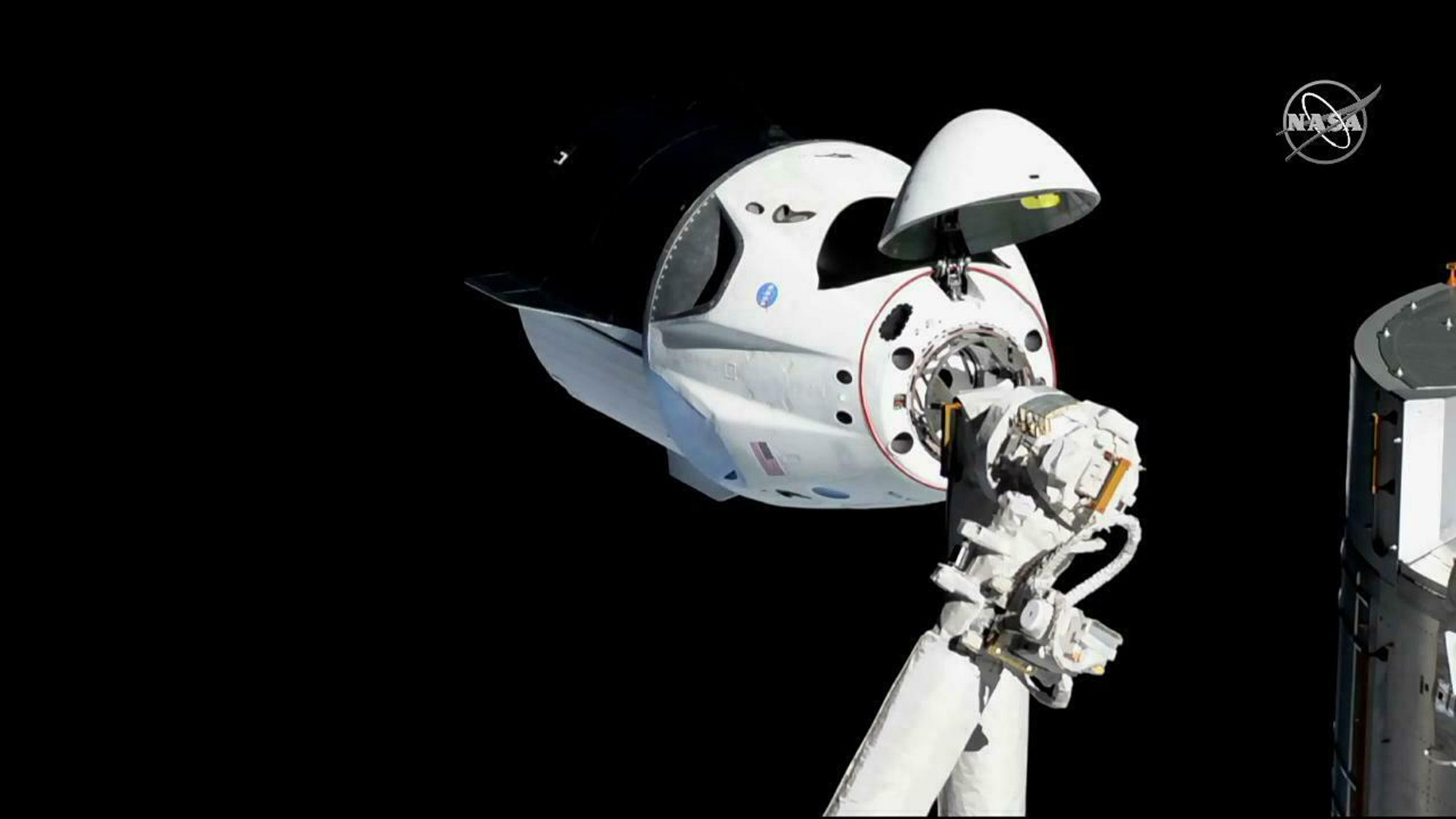 The SpaceX Crew Dragon is pictured about 20 meters away from the International Space Station's Harmony module on March 3, 2019. (Photo: AP )

SpaceX has suffered a serious setback in its effort to launch NASA astronauts into orbit this year, with the fiery loss of its first crew capsule.

Over the weekend, the Dragon crew capsule that flew to the International Space Station last month was engulfed in smoke and flames on an engine test stand. SpaceX was testing the Dragon’s abort thrusters at Cape Canaveral, Florida, when Saturday’s accident occurred.

The company said the test area was clear and no one was injured.

This Dragon was supposed to be reused in a launch abort test in June, with another capsule making the first flight with a crew of two as early as July.

The SuperDraco abort thrusters are crucial to protect astronauts in flight; they’re designed to fire in an emergency and pull the capsule safely away from the rocket.

NASA said Monday it’s too early to revise the target launch dates, given that the accident is still so fresh.

“This is why we test,” NASA Administrator Jim Bridenstine said in a statement over the weekend. “We will learn, make the necessary adjustments and safely move forward with our commercial crew program.”

The University of Southern California’s Garrett Reisman, a former NASA astronaut who directed space operations for SpaceX until last year, said it was a “tough day ... not good” for SpaceX. “But thankfully no one got hurt and with everything we learn from this anomaly Crew Dragon will be a safer vehicle for all her future crews,” he tweeted.

Until Saturday, SpaceX was on a roll to resume crew launches from Florida. The March test flight, to the space station and back, went smoothly. The SuperDraco thrusters embedded in the sides of the capsule, however, were not used during the demo.

SpaceX said it will make sure, through the accident investigation, that the Dragon is one of the safest spacecraft ever built for astronauts. The California-based company released few details, though, on the accident itself and how it might impact future flights.

Former NASA Administrator Sean O’Keefe, now with Syracuse University, said via email Monday that it’s “too early to tell what the implications may be.”

NASA astronauts have not launched from Cape Canaveral since the last shuttle flight in 2011, instead hitching rides on Russian rockets at steep prices. The space agency turned the job over to two private companies — SpaceX and Boeing — to build new capsules to ferry astronauts to and from the space station.

Earlier this month, NASA announced major delays for test flights of Boeing’s Starliner crew capsule. The initial trip to the space station, without astronauts, is targeted for August, with the first Starliner crew potentially flying by year’s end.

NASA stressed that next week’s launch of a SpaceX Dragon cargo capsule remains on track. The supply ship is set to blast off from Cape Canaveral on April 30. SpaceX has been making deliveries to the space station since 2012.

The crew Dragon is a much-enhanced version of the cargo version.