Spain has permits to build giant telescope blocked in Hawaii 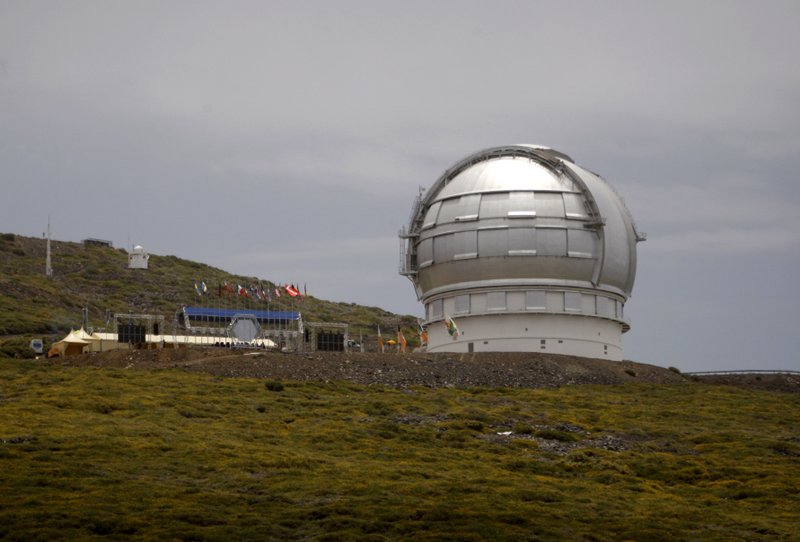 This July 24, 2009 file photo shows the Gran Telescopio Canarias, one of the world's largest telescopes, at the Observatorio del Roque de los Muchachos on the Canary Island of La Palma, Spain. (Photo: AP)

The director of a Spanish research center said Wednesday that a giant telescope, costing $1.4 billion, is one step nearer to being built on the Canary Islands in the event an international consortium gives up its plans to build it in Hawaii.

Canary Islands Astrophysics Institute Director Rafael Rebolo told The Associated Press that a building permit for the telescope has been granted by the town of Puntagorda on the island of La Palma.

“There are no more building permits needed according to Spanish legislation,” he said in an email.

The international consortium backing the construction of the Thirty Meter Telescope (TMT) wants to build it atop Hawaii’s tallest peak. But some native Hawaiians consider the Mauna Kea summit sacred and their protests have stopped construction from going ahead since mid-July.

The Spanish island of La Palma, which already hosts several powerful telescopes at the Roque de los Muchachos Observatory, was chosen as a back-up site for the telescope in 2016.

As point man for the alternative site, Rebolo said he maintains regular contacts with the consortium and Spain’s ministry for science.

Rebolo is optimistic that Spain could end up welcoming the telescope.

“I think it is possible. The Canary Islands offer a very good solution so that the TMT can be built quickly and be a successful project for cutting-edge science,” Rebolo said.

After protesters mounted a blockade of Mauna Kea’s access road this summer, the consortium decided to go ahead and ask for a building permit in Spain in case the Hawaiian site becomes untenable.

The summits at Mauna Kea and La Palma are considered among the best sites in the world for deep-space observation thanks to their prime weather and air conditions.

The large size of the planned telescope’s mirror means it would collect more light, allowing it to see faint, far-away objects such as stars and galaxies. Astronomers hope to peer into the deepest reaches of the universe and examine the time immediately following the Big Bang.