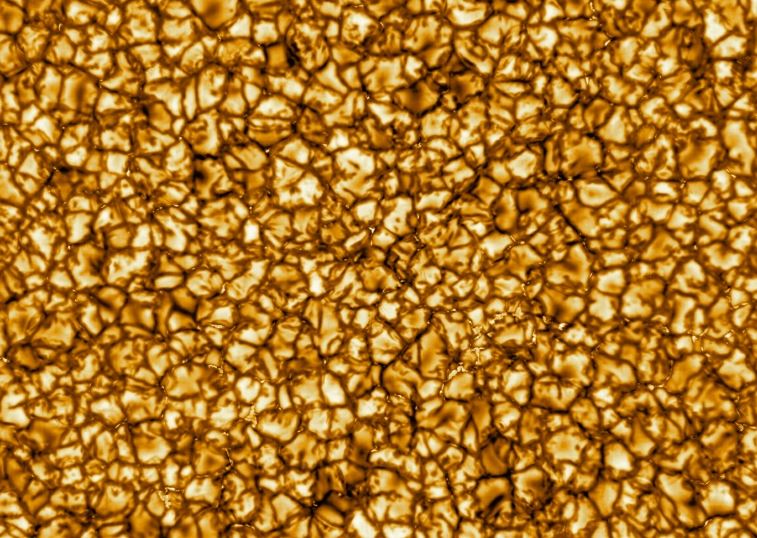 'Boiling' plasma that covers the Sun is seen in the highest-ever resolution images of the star, taken by the new Daniel K. Inouye Solar Telescope. (Photo: AFP)

A huge telescope built on the peak of a Hawaiian island has produced pictures of the Sun's surface in unprecedented detail, revealing boiling plasma cells the size of Texas.

For the telescope's director, that's only just the beginning.

The Sun is a giant ball of plasma (electrified gas) that has been observed from Earth for centuries from telescopes, and via satellites for decades.

But the resolution has been limited: the Japanese space telescope Hinotori had a mirror of 20 inches (50 centimeters).

The new Daniel K. Inouye Solar Telescope on the island of Maui has a 13-foot (four meters) mirror, the world's largest for a solar telescope.

"These images have the highest resolution that you've ever seen," said Thomas Rimmele, the telescope's director.

"We now see structures that we suspected would be there, based on computer models, but we never had the resolution to really see them," added the 60-year-old German astronomer.

Images first published Wednesday show a pattern of boiling plasma covering the Sun in cell-like structures. These are the result of violent motions transporting heat from the star's interior to its surface.

The hot plasma rises in the bright center of the cells, cools and then sinks below the surface in a process called convection.

The telescope came online on December 10 after nine years of construction.

"It was a really emotional moment, I was really happy," said Rimmele, who joined the project 25 years ago before eventually becoming its director. "It's my life's work."

Since the telescope focuses sunlight over a small area, it produces an enormous amount of heat.

"It gets really hot there, you can put metal there and it melts within a very short time," said Rimmele.

Ultimately, the goal is to measure the magnetic fields in the Sun's atmosphere, and in particular in its corona, its outermost area that can be distinguished during an eclipse.

Mapping the Sun will thus help scientists deepen their understanding of these magnetic fields that regulate space weather, allowing us to anticipate storms and turn off sensitive equipment ahead of time.

The telescope has launched at an exciting time for astronomers: the Sun is about to enter a new 11-year cycle, in which it will start to produce new sunspots.

It is currently at the low ebb of its cycle and no spots are visible.

"That is the goal, to publish a close up image, highest resolution image ever of a sunspot," said Rimmele.