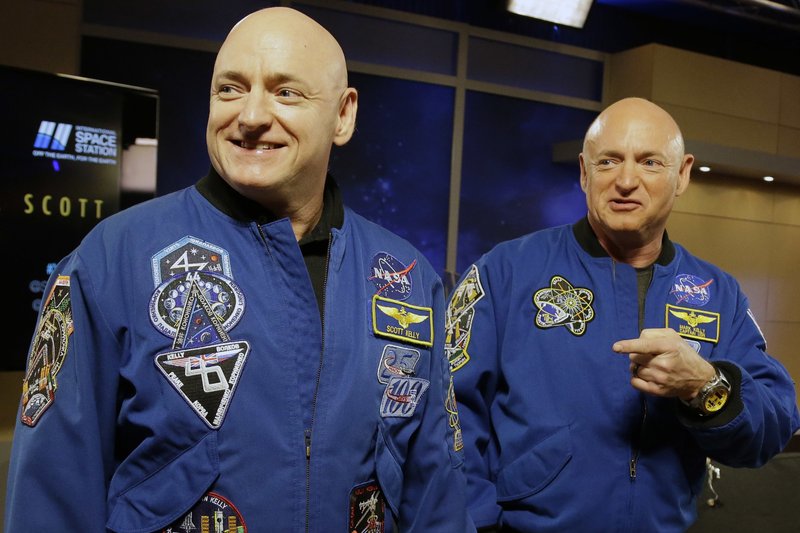 In this March 4, 2016 file photo, NASA astronaut Scott Kelly, left, and his identical twin, Mark, stand together before a news conference in Houston. (Photo: AP)

WASHINGTON, April 11 (Xinhua) -- A NASA-coordinated study on two astronaut twin brothers showed that long-duration spaceflight may change an astronaut's gene expression and pose other health risks, but they are likely within the range for humans under stress.

The study published Thursday in the journal Science reported a multi-system integrated analysis of the changes that occurred to American astronaut Scott Kelly during a year-long spaceflight in comparison to his identical twin and fellow astronaut Mark Kelly, who remained on Earth.

A group of researchers from 12 American universities collected and analyzed samples over a period of 27 months: before, during and after Scott's space mission on the International Space Station.

The findings revealed that Scott's gene expression or the body's response to the environment changed, although his DNA was not altered.

A team with Johns Hopkins University identified a less than 5 percent difference in overall methylation, a process of chemical modifications in gene expression, in the twins' white blood cells.

The largest difference occurred nine months into the space mission when 79 percent of Scott's DNA was methylated, compared with 83 percent of Mark's, according to the study.

"In the last six months of the mission, there were six times more changes in gene expression than in the first half of the mission," said Christopher Mason with Weill Cornell Medicine, who led one of the investigations.

Also, Scott's changes took place near the genes involved in immune system responses during his time in space, causing inflammation.

Among his changes, about 7 percent persisted after six months on Earth, according to NASA.

Those gene changes involve chemical "tweaks" to DNA that can influence how a gene is read or expressed, but don't affect the underlying genetic code itself.

The study also showed that Scott experienced thickening of the carotid artery and retina, weight loss, shifts in gut microbes, reduction in cognitive abilities and higher risks for accelerated aging.

"Given that the majority of the biological and human health variables remained stable or returned to baseline, these data suggested that human health can be mostly sustained over this duration of spaceflight," according to NASA.

But the US space agency said it was necessary to take actions to prevent any damage to astronauts in a planned three-year space travel to Mars in 2030s.

"Since we only have two people in our study, we can't say that these changes are due to space travel itself," said Andrew Feinberg, a professor of medicine at Johns Hopkins. "We need more studies of astronauts to draw such conclusions."