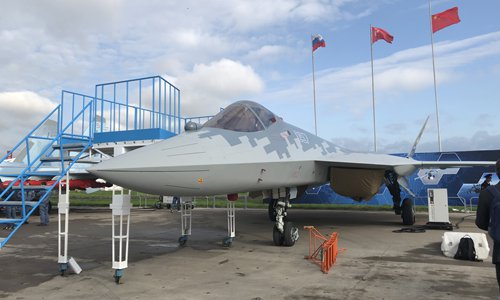 A Russian Su-57 fighter jet is on static display for the first time at the 2019 International Aviation and Space Salon (MAKS) in Zhukovsky, Russia on Wednesday. (Photo: Global Times)

The craftsmanship of the Su-57, believed to be Russia's best fighter jet, is finer than expected but small details, such as the weapons bay door, appear to require improvement, a Global Times reporter observed.

The aircraft was exhibited for the first time on the ground on Tuesday, the opening day of 2019 International Aviation and Space Salon (MAKS) in Zhukovsky, near Moscow, just behind the rostrum where Russian President Vladimir Putin and his Turkish counterpart Recep Tayyip Erdogan held the opening ceremony to the event.

The fighter jet has been seen in videos and photos, but up close the craftsmanship of the fuselage was actually finer than expected from a Russian aircraft, as the texture of its skin looked smooth despite the rivets.

This impression was enhanced when the Su-57 was moved away from the rostrum to the static display ground on Wednesday, where it was exhibited next to the Su-35 and Su-30.

However, the weapons bay door did not seem to fit together perfectly when closed, which could have an impact on flight performance and stealth capability, analysts said.

The air intakes were blocked at the display so nothing could be seen inside the engines.

Dubbed the Su-57E, the exhibited Su-57 is available for export, as countries including Turkey and India are among potential buyers, according to media reports.

Russia has offered China the aircraft, foreign media reported, and there is no report on a Chinese response.

Some Chinese analysts said that China already operates its own stealth fighter jet, the J-20, while the stealth capability of the Su-57 remains questionable, so there is no need for China to make a purchase.

Others said that there are still a lot of innovative concepts and advanced technologies used on the Su-57 like the directional infrared countermeasures system and the engines.

A military expert who asked not to be named told the Global Times that China should conduct performance comparison tests between the Russian and Chinese aircraft under real combat scenarios, which would give China a better understanding of the Su-57's true capabilities, before the country decides whether a purchase is worthwhile.