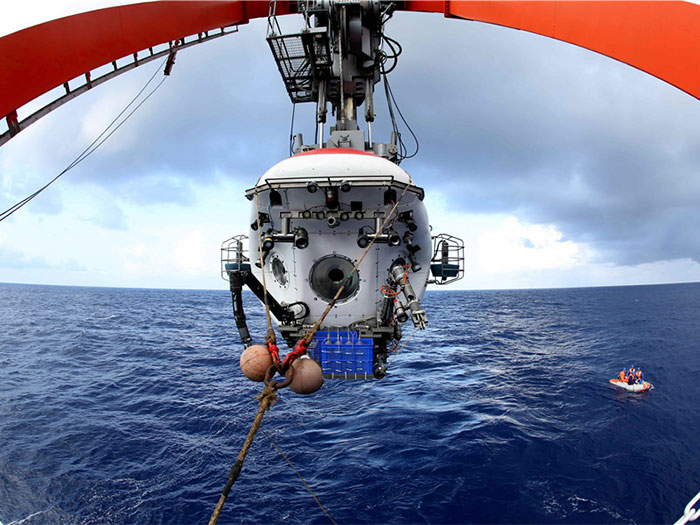 Chinese engineers are striving to finish the construction of the world's first manned submersible capable of conducting complex scientific research in the deepest part of the oceans — the bottom of the Marianas Trench — before the end of this year, according to a project insider.

Engineers at the China Ship Scientific Research Center in Wuxi, Jiangsu province, a subsidiary of the State-owned shipbuilding conglomerate China State Shipbuilding Corp, have assembled the deep-diving submersible's structure and are currently installing equipment inside it, Liu Jiarui, a project manager at the center's science and technology section, said on Wednesday.

Their goal is to complete the electrically powered submersible, which has yet to be named, before year's end and then start conducting tests in a lake in Wuxi before the craft begins sea trials, he said at the Marintec China 2019, a marine technology exhibition that opened in Shanghai on Tuesday.

In 2021, the submersible will be delivered to the Chinese Academy of Sciences and will be used to carry out manned expeditions in the Marianas Trench, he said.

Liu said the submersible would be the "first capable of taking humans 10,000 meters underwater to perform scientific missions", adding that almost all of the craft's apparatus and technologies were developed by Chinese researchers on their own.

Scientists said earlier submersible trips to the bottom of the Marianas Trench were made by simpler craft incapable of complex research.

Researchers from about 30 domestic institutes under China State Shipbuilding Corp and Chinese Academy of Sciences have taken part in the project, he said.

The project manager said designers and engineers overcame a great deal of difficulties to build the submersible's sophisticated equipment, such as the titanium alloy-based pressure sphere holding the crew and ultra-deep communication devices.

"Many devices on the submersible have undergone extensive tests to verify that they can withstand the ultra high pressure at 10,000 meters beneath the surface," Liu said.

Once the craft enters formal operations, it will carry three crew members in each deep-diving operation, which can last as long as about 10 hours. Allowing for ascent and descent, the crew will be able to carry out around two hours of scientific tasks at a depth of more than 10,000 meters, he said.

Jiaolong entered service in 2010, making China the fifth country to have deep-sea exploration technology after the United States, France, Russia and Japan. During a test dive in June 2012, it reached its deepest depth — 7,062 meters — in the Marianas Trench.

With a 4,500-meter capability, Shenhai Yongshi was delivered to the Chinese Academy of Sciences in late 2017 and is engaging in intensive scientific operations.