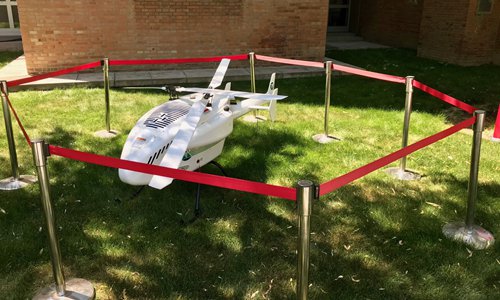 The biggest drone is on show at the Swiss Embassy in China by SwissDrones Operating AG in Beijing, June 14, 2019.  (Photo: Global Times)

Startups in the drone sector from Switzerland are looking for more business opportunities and partners after their initial cooperation with some distributors in China, which is yet to unleash huge potential through the skilled workforce.EBP, a family enterprise which focuses on river basin management, has set up a representative office in Shenzhen, South China's Guangdong Province. The global company is applying drone technology to water pollution control. "Southern China's economy is very dynamic, and more flexibility and openness are offered in Shenzhen," Rao Fu, an environmental engineer with EBP, told the Global Times."It's harder to access the water and the environment management market as they're strictly regulated by the government," Fu said,Shenzhen attracts many skilled workers or experts, it is an ideal city to build a brand in China, she added.Cao Likai, 29, a Tsinghua alumni, recently joined EBP's Shenzhen office, after attending a one-year exchange program in Switzerland as a water engineer. Fu finds China's opening-up policies will offer more promising business opportunities. "China is leading in several segments of the drone market, including engineering and production of drones. Switzerland's pioneering role in several niche segments, such as in the area of sensors and analytics, complements the strengths of China, creating unique opportunities for commercial and R&D collaboration," said Swiss Ambassador to China Bernardino Regazzoni, at Swiss Innovation Week 2019 on Friday in Beijing. A toal of 11 enterprises are featured for this year's Innovation Week, hosted by Swiss Embassy to China. Nivitec, a Swiss startup company that creates solutions in safety and rescue field via drone technology, is seeking cooperation with DJI, China's leading drone manufacturer, during their first visit to China. Stephanie Ferreira, 26, economist with Nivitec, was impressed by Chinese university students' confidence and capabilities during a recent activity called brain lab. "With great business environment and talents in China, we see possibilities to have our China branch set up some day," Ferreira said. Vincent Bontempelli, 25, co-founder of Nivitec, foresees more exchange programs between Chinese and Swiss universities. Drones are shaping the airspace of the future. Switzerland is one of the highflyers in drone technology and has positioned itself as a leading research and innovation hub.SwissDrones, a company that specializes in the development and production of unmanned helicopters for civil purpose has developed its market in China for more than three years through its reseller based in Tianjin. Lukas Obrist, owner of SwissDrones, finds China's market full of potential."With more infrastructure to come, especially with the Belt and Road Initiative, the demand for infrastructure inspection and maintenance sector plus the search and rescue sector will be huge," Obrist said. "As our clients are governments, they cope with regulations rather easy. Of course, as a foreign company, there are some cultural differences we have to overcome." Obrist said that during the communication with their Chinese counterparts, who are so keen to get answers as soon as possible, they had to adopt various tools including WeChat, SMS and LinkedIn other than email. Compared with other markets in Europe, North America, and southeast Asia, Chinese clients are more thoughtful, and his company can get the production pipeline working, Obrist said, enjoying long-term cooperation. Talking about his impression about skilled workers in China, Obrist told the Global Times citing a recent session with Chinese alumni during the innovation week, "China's talents' skill level is very high, I am impressed. It's a strength that China's picking up very fast." Over the last six years, Switzerland's "Drone Valley" has attracted more than 80 start-ups and has created more than 2,500 jobs, many of which have spun off from leading research groups such as the Swiss Federal Institutes of Technology in Zurich and Lausanne.China and Switzerland gained tremendous achievements in the field of innovation. The Sino-Swiss Free Trade Agreement signed in 2014, the Innovative Strategic Partnership established in 2016 and the High-Level Platform of the Sino-Swiss Innovative Strategic Partnership offer unique opportunities to develop and strengthen bilateral ties.