Standing in front of a Chinese national flag and a flag of the Communist Party of China (CPC), the first crew of taikonauts stationed in the China's space station's Tianhe core module, sent their “heavenly blessings” on Tuesday for the upcoming centennial of the CPC which falls on Thursday. 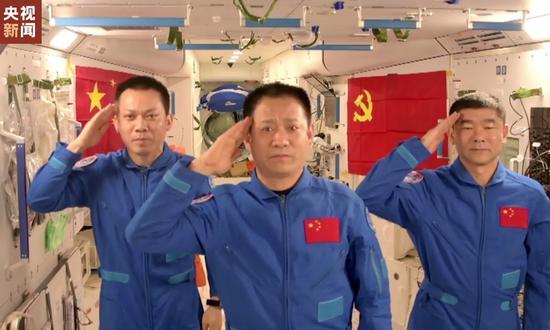 “Happy anniversary to the great Communist Party of China,” Taikonaut Nie Haisheng and his fellow crew members Liu Boming and Tang Hongbo, spoke to the camera onboard, footage released by the state broadcaster China Central Television on Wednesday showed.

The footage also shows them working aboard the space station.

The three taikonauts moved into the orbital spacecraft on June 17 and they are expected to stay three months in space during which they would carry out key technology verifications, per mission plan.

Sun Jun, the mission chief of the space station project at the Beijing Aerospace Flight Control Center, said on June 23 that the first extravehicular activity or spacewalk of the taikonauts was expected to take place in some 10 days.

Observers predicted a long duration operation outside the cabin which shall mark a country’s first, with the support of robotic arms, could take place as soon as on the weekend following the July 1 grand celebration.