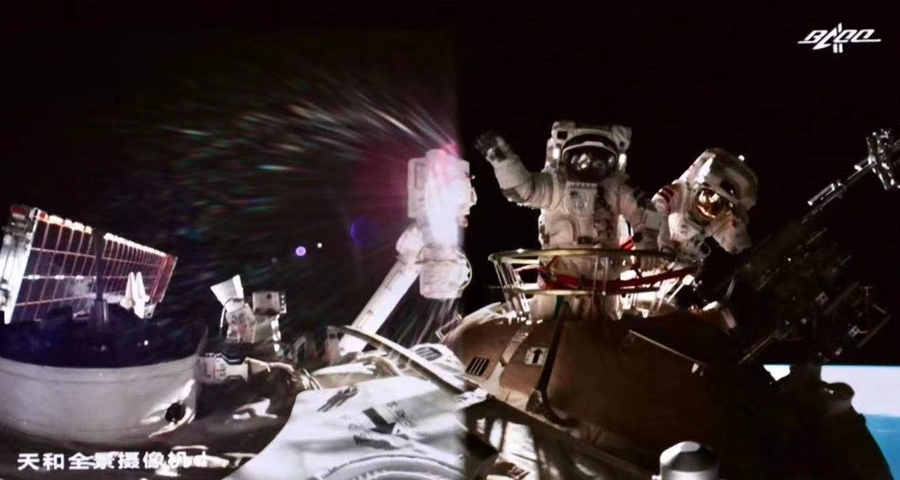 Taikonauts of the Shenzhou-12 crew delivered a second spacewalk on Friday following the first on July 4, after living in China's Tianhe space station core module for over 60 days and roughly a month before their return to Earth.

The next manned flight mission of China's space station building stage, Shenzhou-13, is expected to send three new taikonauts, very likely including a woman crew member to China's Tianhe space station core module in September, for an even longer stay of six months.

Yang Liwei, director of the China Manned Space Engineering Office and the country's first astronaut, revealed earlier in May that although there would not be any woman astronaut in the Shenzhou-12 mission, they will basically participate in every succeeding mission.

As one of the most highly-anticipated events, Shenzhou-12 mission commander and veteran astronaut Nie Haisheng and his fellow crew member Liu Boming were tasked to exit the cabin for Friday's mission. Tang Hongbo, the third and youngest member of the crew, was assigned to play a supporting role and operate the robotic arm system to aid the other two on Firday, the China Manned Space Agency said in a statement provided to the Global Times.

Nie and Liu safely returned to the Tianhe core module at 2:33 pm. 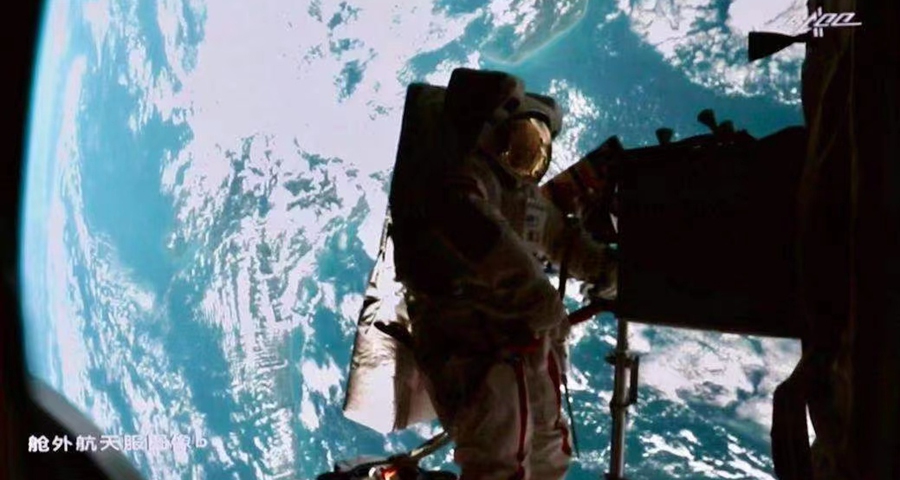 Friday's extravehicular activities lasted 6 hours, during which Nie and Liu accomplished their preset goals efficiently. The crew showed more calm and composure in their execution than the first spacewalk despite the high stakes of the mission.

According to mission insiders, the spacewalk procedures were also optimized in many ways, including space-ground communication, and Liu even made DIY tool kits to facilitate the installation outside.

After the successful completion of Friday's mission—where Nie went outside instead of Tang (who went outside in the first mission)—all three members of the Shenzhou-12 manned flight mission have had spacewalk experience.

Besides verifying the flexibility and reliability of the new homegrown spacesuits, a change of the outside mission roster would also enable all three Shenzhou-12 taikonauts to have actual EVA experience, which will lay the groundwork for other space station missions, Wang Ya'nan, chief editor of Aerospace Knowledge magazine, told the Global Times on Wednesday.

Pang Zhihao, a senior space expert based in Beijing, told the Global Times that as young as Tang is, he also needs to learn to master a variety of skills such as operating the smart robotic arm, as he will also play a part in future manned missions for the space station's building and running.

It is worth noting that the new generation Feitian spacesuits are capable of supporting long duration spacewalk missions up to 8 hours each time, and can be reused as many as 15 times.

Nie Haisheng, who mounted the robotic arm in the mission, installed an expansion pump set, which will serve as one of the power sources for the operation of the fluid circuit of the space station's thermal control system, the Global Times learned from the system developer China Academy of Space Technology (CAST) on Friday.

Known as the "central air conditioner" for China's space station, the thermal control system is key to ensuring the normal running of all facilities on board as well as the comfort of astronauts' stay in space, protecting the orbiting spacecraft from the harsh space environment where the surface temperature can reach more than 150C when exposed to direct solar radiation, and drop to minus 100C when the craft travels to the dark side.

Chief designer of the space station thermal control sub-system Han Haiying compared the pump set installed outside the cabin to a "circuit heart," which ensures the steady running of fluid across the system like the way the heart pumps blood all over the human body.

Eyeing the requirements to sustain at least 15 years' running of the space station, CAST developers emphasized long endurance, reliability, repair-friendly and safety of the system at the designing stage. They also raised the idea of installing multiple expansion pump sets both inside and outside the cabin, ensuring their long stand-by capability in order to sustain the long steady running of the space station, Han explained.

As Nie turned the wrench for the last time for the installation, with the connection of the electric and hydraulic circuits, CAST developers said they felt as if they were starting to hear the beating of a heart and they could also see the solid foundation for the 15-year stable running of the space station.

The circuit pump, a part that runs at a high speed for a long time, has a limited service life. Therefore, it must be repair- and replacement-friendly, according to the CAST.

The thermal control team invented an exquisite and easy-to-use solution, integrating all the parts that need to be replaced into an extended pump set, facilitating the complicated connection work of machinery, electronic and fluid circuits, and "making astronauts pump-changing processes as easy as changing a tire."

There are already three such thermal control pump sets inside the cabin and the one to be installed outside on Friday will act as a backup for the space station.

Raising the panoramic camera enables the "eyes of the space station" to obtain better vision, which is key when monitoring the craft's running environment and performance in space, mission insiders revealed.

The reason why the cameras were not in an ideal position to begin with was that there was little space to do so at the launch stage, they explained.

Nie and Liu's spacewalk ranked atop China's Twitter-like platform Sina Weibo ever since state broadcaster China Central Television started to air the feat around 10 am on Friday, and has since gathered more than 200 million reads as of press time. 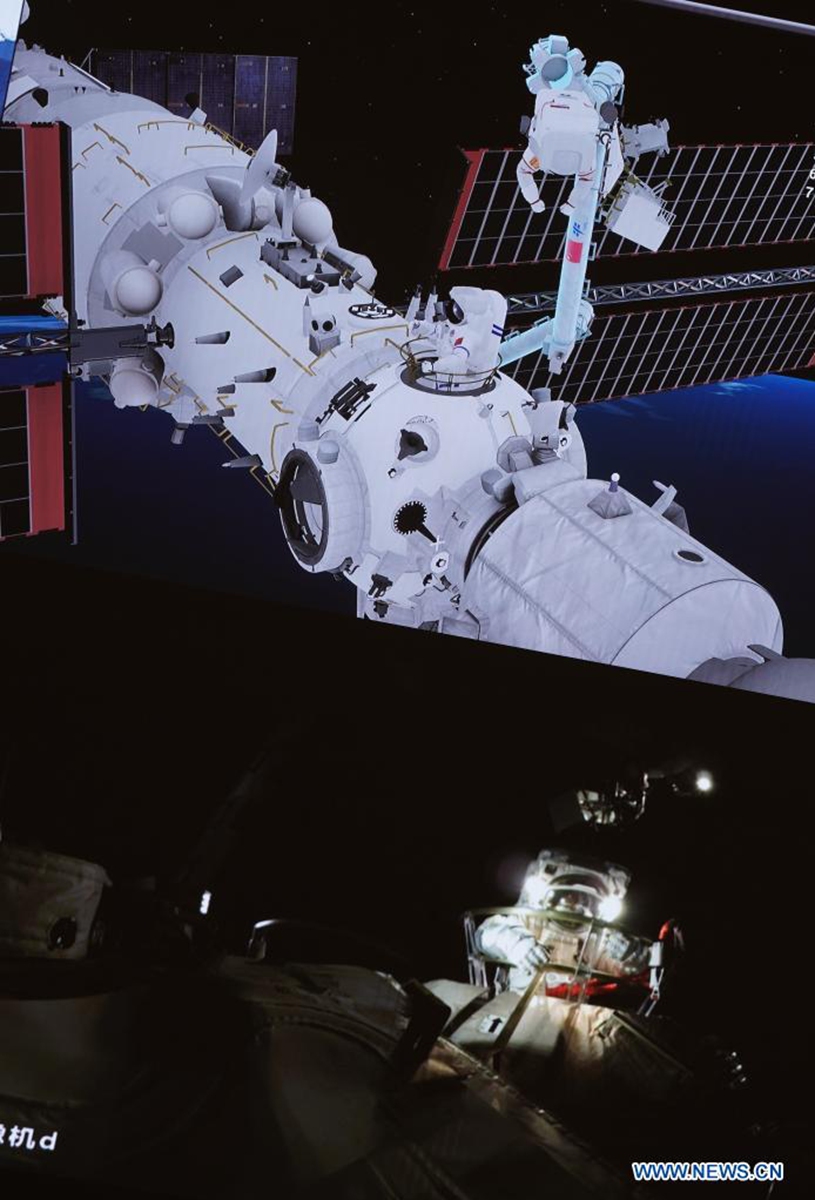 Chinese netizens left comments online Friday saying that "we were too busy cheering for our great Olympic athletes at the Tokyo 2020 Games that we almost forgot about our heroes up in space."

Others said they are looking forward to the victorious homecoming of the three heroes.

The CMSA said Friday the Shenzhou-12 crew is expected to return to Earth by the middle of September to the Dongfeng landing site in the desert of North China's Inner Mongolia Autonomous Region.

The crew will continue to carry out space science experiments and technology verification in their third month in orbit.

The Dongfeng landing site received the return capsule of the trial version of new-generation manned spacecraft, after a flight of two days and 19 hours in May 2020.

The Tianzhou-3 cargo spaceship and Shenzhou-13 manned spaceship will be launched in September and October, respectively, and three astronauts onboard the Shenzhou-13 spaceship will spend six months in orbit, which will be the "new normal" for future crew deployments, according to CMSA.

Although the Chinese station can accommodate up to six astronauts for short periods during personnel rotation, sources said that will not happen this time.