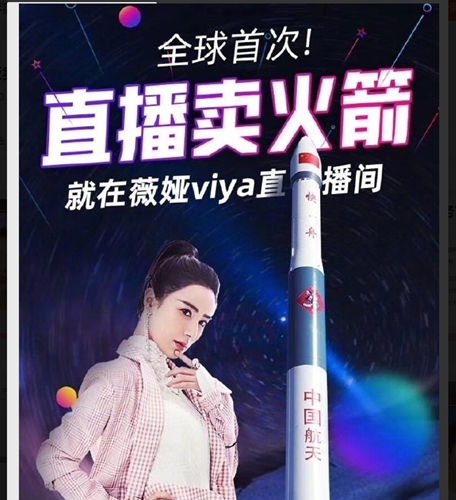 Taobao published on Wednesday a manual for choosing the right rocket on its Sina Weibo account, which led many netizens to initially believing it was an April Fool's Day joke.

"This is for real," confirmed Taobao in another post on its Sina Weibo, who claimed it will live broadcast the product on Wednesday night. The rocket is the Kuaizhou-1A solid-fuel carrier rocket, made in Wuhan. Not only can buyers order to launch the rocket, but they can also decorate the rocket as they desire, visit the launch site, and command the launch.

The deposit for the rocket was 500,000 yuan, and was sold out minutes after being auctioned online.

The idea did not come out of the blue as Taobao initiated online polling on March 27, asking netizens to choose their most wanted service or object to be sold by live broadcasting. The options were rockets, satellites, a partner or a cleaning lady; with the rocket winning the contest.

Cao Meng, a marketing manager from Expace Technology Co. who produced Kuaizhou-1A said that he saw the poll launched by Taobao a few days ago, and wondered if his company could sell the rocket on Taobao's live broadcast. He jokingly made the offer via Sina Weibo and one live broadcaster approached him, making the idea possible.

Taobao said the product costs around 45 million, and those who buy the rocket during the live broadcast will get it 5 million cheaper.

Netizens, both excited and puzzled by Taobao's move, gloated online with comments such as "how do I even have the courage to look at this stuff?" "This is an innovative idea, but I can't afford it even if I sold myself," said another.