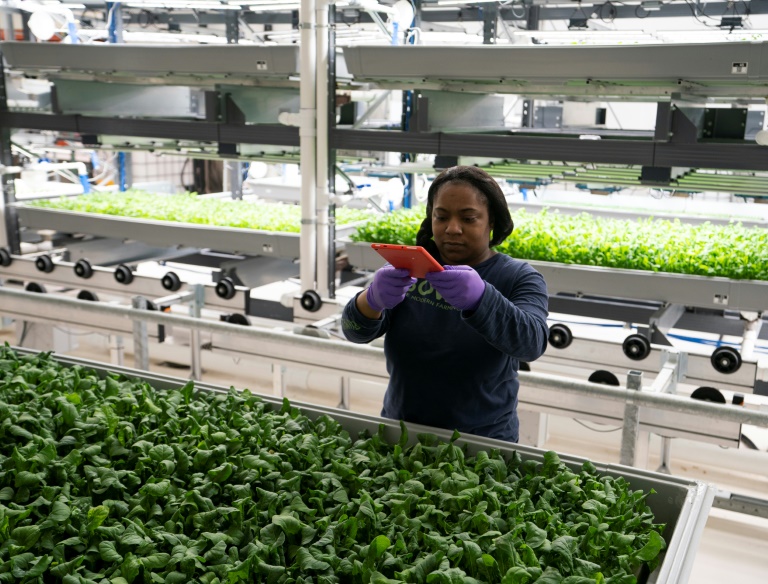 A Bowery Farming employee inspects some of their greens grown at the hydroponic farming company in Kearny, New Jersey (Photo: AFP)

Workers at Bowery Farming's warehouse near New York have swapped out a farmer's hoe for a computer tablet that takes real-time readings of light and water conditions.

Launched in 2015, Bowery is part of the fast-growing vertical farming movement, which employs technology in a controlled, man-made setting to grow fresh vegetables indoors all year long.

Champions of the practice see vertical farming as a key tool to meet the world's food needs at a time when the population is rising and the climate is changing.

"I have been a big believer my entire life in technology as being able to solve not only hard problems, but also important problems," said Fain, who previously ran a company that provides data analysis for big companies on their loyalty programs.

Bowery employs more programmers than agricultural scientists. The company says its use of algorithms enables it to be 100 times more productive per area compared with a traditional farm and to use 95 percent less water.

Vertical farming has long been practiced in Japan and some other places but it did not take off in the United States until recent technological leaps made it viable.

A key component has been LED bulbs, which have enabled indoor farmers to drastically cut electricity costs.

But Bowery is also making heavy use of robotics and artificial intelligence to keep prices under control.

The combination of these newer tools "is how we really rethink what agriculture will look like in the next century and beyond," Fain said.

The company has also benefited from more than $120 million in funding from tech titans including Google Ventures and Uber Chief Executive Dara Khosrowshahi.

The Silicon Valley connection has also boosted San Francisco-based Plenty, another prominent vertical farming company, which has garnered more than $200 million from Amazon Chief Executive Jeff Bezos, Softbank and others.

US-based Crop One and Emirates Flight Catering have launched a $40 million joint venture to build a giant vertical farming facility in Dubai.

The world's biggest vertical farm is in Newark, New Jersey, and operated by AeroFarms.

The company, founded in 2004 and considered a pioneer in the sector, remains privately-held and does not disclose financial data.

But AeroFarms, whose business model evolved over the years, says it is now profitable.

It started as a farm selling produce locally but decided, in 2009 to shift to selling the technologies and solutions it had developped to other growers. The company then pivoted back toward growing its own leafy greens for sale in 2011.

AeroFarms exclusively uses company-made technology that has now made its way to China, the Middle East and Europe, said its co-founder Marc Oshima.

In a warehouse that was once a steel mill with 40-foot (12-meter) ceilings, the company is growing kale and arugula leaves set in rows of 12 metal racks each. The roots are suspended in the air as they are intermittently irrigated while the leaves bask under LED lights.

AeroFarms experiments regularly with lighting and nutrients with an eye towards finding the optimal recipe for each plant and developing the best algorithm.

The company produces watercress that reminded a reporter of her grandmother's soup, kale as tender as spinach and arugula with a hint of spice.

David Chang, founder of the noodle restaurant brand Momofuku, is an investor.

Basil from Bowery Farming was tinged with the flavor of lemon.

But it can take a while for vertical farms to find solutions that are viable.

"The big, big vertical farms are having a difficult time being profitable because they are so capital-intensive at the beginning," said Henry Gordon-Smith, founder of Agritecture, a consultancy.

Large farms typically need seven or eight years before they are profitable, with smaller farms requiring perhaps half as long.

But entrepreneurs in the business are confident in their prospects as more young people in cities express worry about climate change and pesticides.

"Vertical farming is not THE solution to food security," said Gordon-Smith. "It is one out of the possible solutions."

Critics of vertical farming say it has a large carbon footprint due to heavy use of lighting and ventilation.

But defenders say that this negative impact is more than offset from the benefits of lower water use, the location near population centers and the non-use of pesticides.

A bigger issue may be the limitations of the output itself, at least in terms of nutrition.

Gauthier -- who grew spicier peppers in his own lab by subtly increasing potassium levels -- said vertical farming could supply fresh food to so-called food "deserts" where it is absent and could in the long-term meet growing food demand as the climate changes.