TECH Tech is taking the art world by storm

Tech is taking the art world by storm 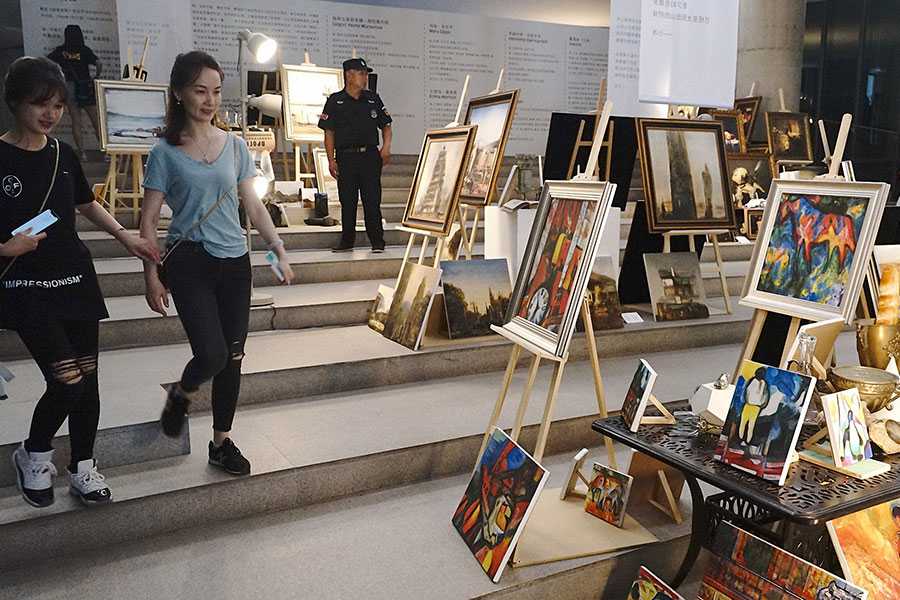 Paintings by Xiaoice, an AI robot developed by Microsoft, are displayed at an exhibition in Beijing on July 13. (Photo by Cheng Gong / for China Daily)

You type it, Xiaoice draws it－artificial intelligence is challenging existing ideas of creativity

In a glitzy hall in Beijing, a special painting exhibition is underway. From the style of Dutch artist Rembrandt van Rijn to Japanese genre Ukiyo-e, the painter presents all the possibilities of what she can achieve. And more importantly, she is an artificial intelligence robot.

Xiaoice, the AI bot developed by tech giant Microsoft, drew more than 100 pictures. And, after learning from 236 painters from the past 400 years in 22 months, Xiaoice can now draw "entirely original" images close to the level of the original artists, and all the paintings are "inspired" by nothing more than text, Microsoft said.

You type it, Xiaoice draws it. Xiaoice's capabilities highlight how rapidly AI is advancing. And the painting exhibition is just part of global tech companies' efforts to prove that AI now can move beyond mechanical, repetitive work to march into the art industry, which demands original thought and has long been viewed as something unique to humans.

"Xiaoice's paintings are created when she is 'inspired'. They are completely independent and original new works, and not adjustments or style migration from what humans have already painted," said Xu Yuanchun, general manager of the AI creation department at Microsoft's Search Technology Center in Asia.

According to him, Xiaoice has millions of different reactions to a source of inspiration just like a person. When users type a word, Xiaoice could draw vastly diverging pictures in response to that word.

"We don't know what surprises Xiaoice will bring us, and the unpredictability is the charm that attracts us," Xu said.

This is not the first time that Xiaoice has created something. Started as a chatting robot in 2014, Xiaoice has already been "talking" with more than 100 million users, published two collections of poetry and released and composed dozens of songs.

All these endeavors have helped accumulate more than 5 million followers on a Chinese micro blog, as Microsoft continues to experiment with how AI can use emotional intelligence to serve as a companion for people and how AI can be used to imbue machines with "creativity".

Elsewhere in the world, researchers and industry participants are also experimenting with AI. In 2017, US singer Taryn Southern unveiled Breaking Free, a song composed and produced by an AI system developed by US startup Amper Music.

Last year, an AI-generated painting of Edmond Belamy became the first of its kind to be auctioned at Christie's. The artwork, created by computer algorithms developed by French AI company Obvious, was sold for more than $430,000.

Just like Xiaoice's paintings, such AI-generated work is based on machine-learning models of artificial neural networks that resemble the human brain and nervous system, which can study input materials and produce output in their own right.

When it comes to AI painting, a neural network that goes by the acronym GAN plays a key role. GAN, which stands for generative adversarial network, creates the image pixel by pixel. Like any other artist or designer, it produces both broad strokes and fine details in layers.

But as pioneering AI-generated works appear around the world, the tech companies and art critics are also addressing the fundamental question of whether the images, poems or songs produced by their networks can be called art at all.