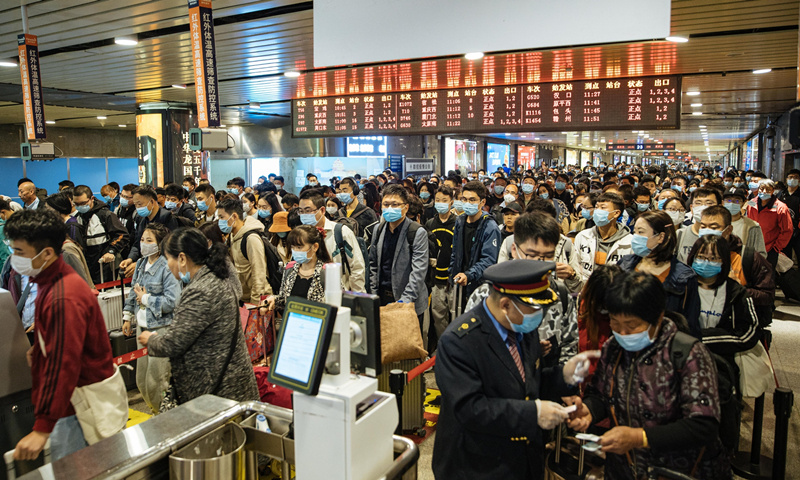 Here are some technologies that helped Chinese tourists enjoy their "revenge travels."

At the Shanghai Hongqiao International Airport, those who arrived had their temperature automatically checked by an infrared measuring machine before leaving the airport.

The system can accurately measure body temperature within 0.3 C, Shanghai media reported. Those with abnormal temperatures are reported by virus-prevention staffers to airport administrators.

The health code system, a convenient way to record and show one's position and movement, which has been widely used across China in the fight against the COVID-19.

The current health code system has been largely improved and simplified for greater convenience. During the Golden Week, visitors found they could directly use a national version of the health code in most places in China, rather than spending time applying for several regional ones.

With the health code system, tourist destinations can effortlessly know whether their visitors have been to high-risk COVID-19 areas in the past 14 days, which helps reduce the possibility of cross-infection. Staff at several popular tourist attractions, including Yuyuan Garden in Shanghai and Wugong Mountain in East China's Jiangxi Province, told the Global Times that they asked visitors to show their health codes before entering.

Each year, the sharp increase in passengers during the Golden Week and the Spring Festival holidays has become a challenge for China's airports and railway stations. This year, many transportation hubs used the facial recognition system in checking passengers' identity and tickets, which dramatically saved time.

At a railway station in Shaoyang, Central China's Hunan Province, for instance, passengers pass through the gate to the platform by simply putting their ID cards on an inductor, and look at the camera on the gate. "I don't even have to hold a paper ticket," a passenger told the Global Times, saying the inductor can read his ticket information from his ID card. "That's very convenient."

Trying hard to find one's luggage at the carousel can be tiresome, especially during the crowded Golden Week holidays. To solve this problem, a few Chinese domestic airports reportedly launched an online luggage-tracking service to help passengers know the real-time locations of their bags.

An airport in Shenzhen, South China's Guangdong Province had partly realized the interconnection of luggage transport information with the Shanghai Hongqiao airport by 2019, Xinhua News Agency reported in September 2019. Passengers who took an Eastern Airlines flight between Shenzhen and Shanghai could check where their bags were on their mobile phone.

Air China also tested this service at two airports in Beijing and Chongqing, according to aviation industry portal the Civil Aviation Resource Net of China. "This new function is not yet available nationwide," an Air China staffer told the Global Times Friday.