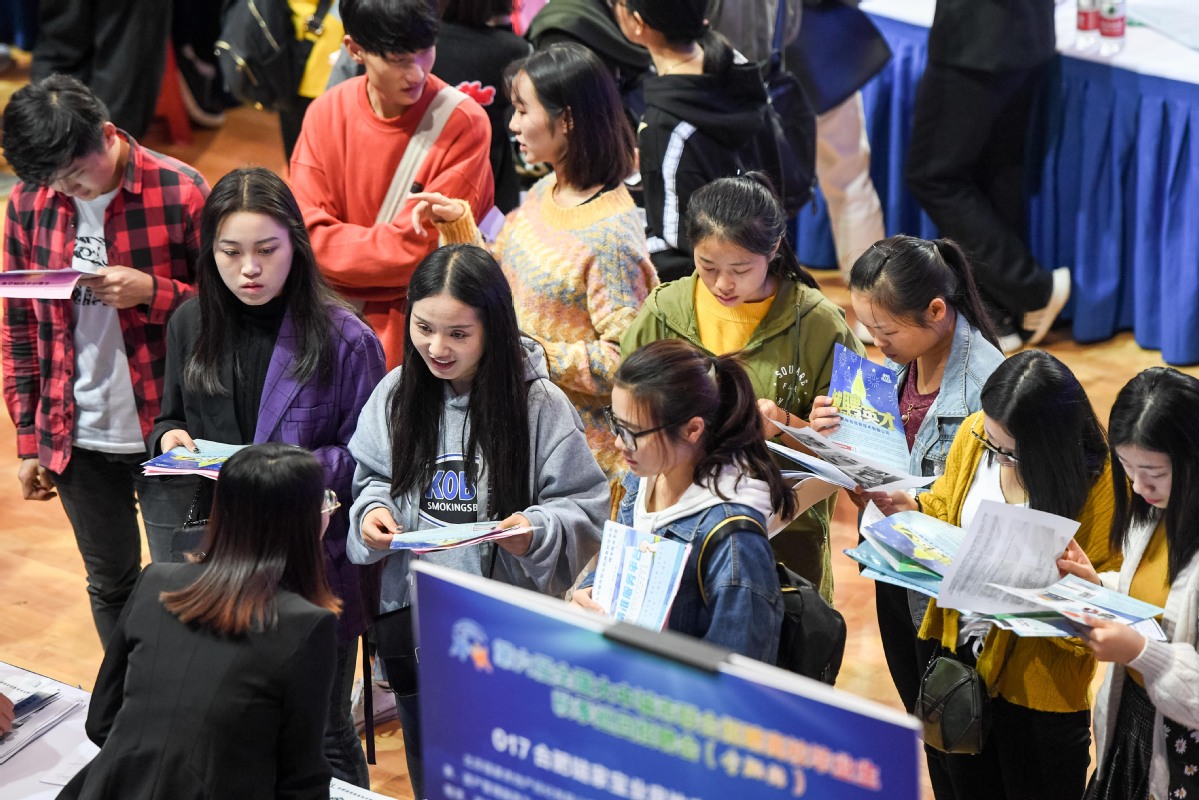 Job seekers speak with recruiters at Hefei University in Hefei, Anhui Province, at a job fair for college graduates on April 3, 2019.. (Photo: Xinhua)

The escalating China-US trade war, which has become a new cold war in technology, has made attracting talent an urgent task. The recent call by the founder of China's Huawei to enhance the country's fundamental education system was echoed across Chinese society, while observers emphasized the importance of science and math. In a recent interview with China Central Television aired over the weekend, Huawei founder and CEO Ren Zhengfei, whose company is now in the middle of the China-US trade battle, reiterated the importance of fundamental education and research instead of spending too much time talking about his company's future. The 75-year-old entrepreneur said that he cares about education the most because he cares about the country. "If we don't attach importance to education, we'll actually return to poverty," he remarked.

The country's development relies on culture, philosophy and education, which are fundamental, Ren said. And the escalating China-US trade war involves strength in science and technology, which comes down to the level of education. His remarks put the focus on basic education. Wang Lixin, vice mayor of Shenzhen, a city that is often seen as the new Silicon Valley as it gathers hundreds and thousands of high-tech firms, said at a recent conference that  fundamental research is important to not only Shenzhen but the whole country. "In the 1980s, we often said if you learn math, physics and chemistry well, you will achieve anywhere. Then we had doubts, as working in finance, economy or design would earn you more money. Considering the current situation, it's time to bring up that slogan again," Wang was quoted as saying in media reports on Sunday.As part of broader efforts to strengthen science and technology, Shenzhen, which is now at the forefront of the China-US tech battle, where tech firms such as Huawei and DJI being targeted by the Trump administration are located, has vowed to invest one-third of its science and research funding to fundamental research, to the tune of over 4 billion yuan ($580 million), reports said. On China's Twitter-like Weibo, net users praised Ren's call and considered improving the country's education system as the most urgent task. "High-tech growth cannot be supported only by a huge amount of money. Only with continuous efforts in fundamental education can the goal be achieved," a netizen said. A mother surnamed Song, who lives in western Beijing's Haidian district, said she has always insisted that fundamental education should not become a heavy burden for children. However, the escalating trade war, especially the Huawei incident, has made it more urgent to enhance the country's overall STEM education, she believed. STEM stands for science, technology, engineering, and mathematics, and these academic disciplines are often seen as fundamentals for a country in a race for high-tech supremacy. "I'm thinking about sending her to an afterschool training course on mathematics this summer," she told the Global Times on Monday, referring to her 7-year-old daughter, who is now living at an increasingly competitive environment. Fundamental researchAs the world's two largest economies spar over tech, Chinese industry representatives are considering enhancing fundamental education, including science and math, as a major task, especially after many Chinese parents have been complaining in recent months about the current dogmatic policies of stifling rising talent. The authorities' latest move to ease the schoolwork burden on primary and middle school students also weakened science and math education, and the ban on extracurricular coaching for Olympiad-style contests issued in 2018 will seriously affect the cultivation of talented students in STEM, analysts said. "This one-size-fits-all approach will hurt fundamental education in the country and make our children fall behind their American counterparts in the future, which needs to be corrected," Mei Xinyu, a research fellow at the Chinese Academy of International Trade and Economic Cooperation, told the Global Times. The Ministry of Education issued a guideline in December 2018 to ease academic burden in primary and middle schools. The guideline says primary and high schools are forbidden from hosting math Olympiads to recruit students. The move follows a change in policy on stopping the awarding of extra points to students who have won academic Olympiads or science and technology competitions.But parents also applauded the government's efforts to ease the children's burden, while some advocated a happy-elementary-education approach. Ren said he attaches great importance to fundamental research, and the country should invest more in developing mathematicians, physicists and chemists instead of just pouring money into industries. The US clampdown on Huawei, as part of the China-US tech battle, will stimulate technological self-reliance while boosting scientific research and innovation, as US sanctions also exposed the country's high-tech Achilles' heel due to Huawei's reliance on American technologies and core components reflecting the overall shortcoming in the sector.  It's becoming more urgent for Chinese tech companies to attract talent, as the tech war will eventually become a battle for more talent, analysts said. "Our country has to have an awareness of crisis, and to clearly see the real gap between China and the US in education," Chu Zhaohui, a research fellow at the National Institute of Education Sciences based in Beijing, told the Global Times on Monday. For instance, American students have a deeper understanding of natural sciences and mathematics, as they learn by following their own interests, he noted. "How to arouse the interest of Chinese students in science and technology, which will lead to better fundamental research, remains a challenge," he said.