By introducing spoken Chinese to South Koreans through mobile apps, Chinada, an education startup in Seoul, has attracted nearly 500,000 users in less than five years. It is now one of the largest Chinese-learning platforms in the country. 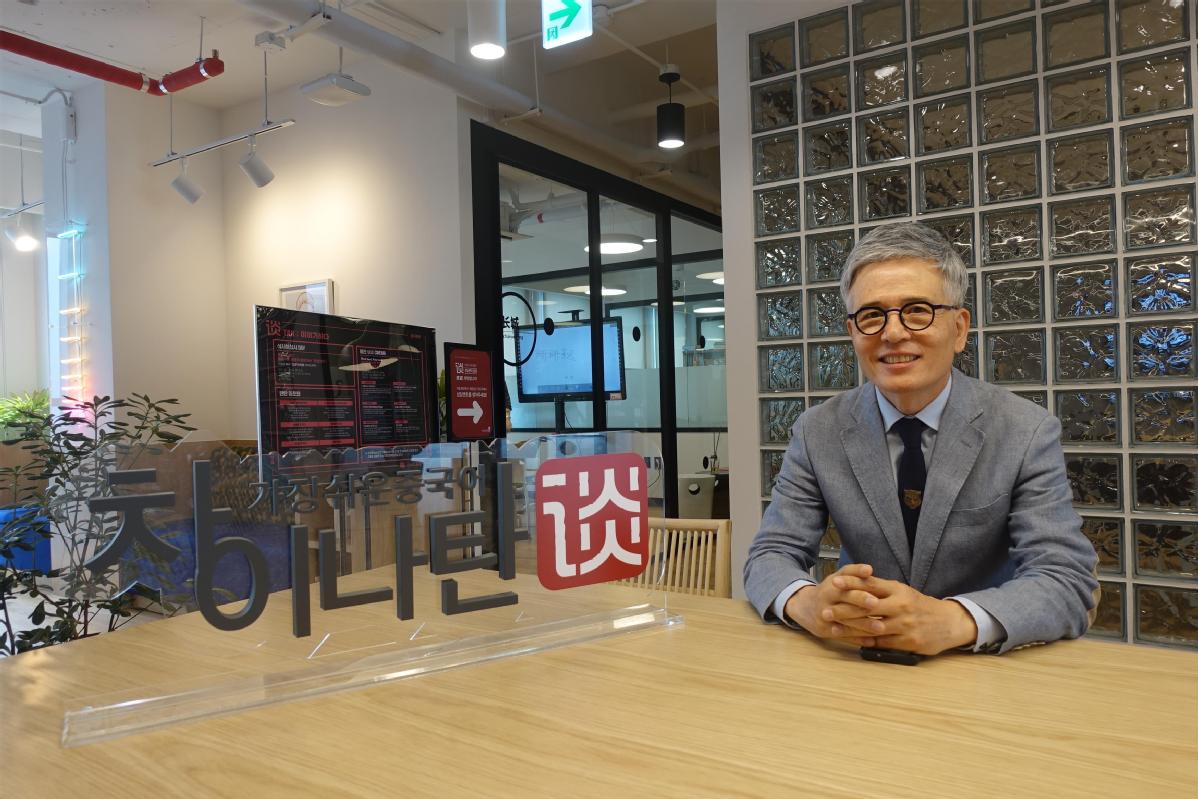 Established in 2011, Chinada launched the Chinese-language teaching service Chinatan through its website and mobile app at the end of 2014. In Chinese, tan means "to talk", indicating the company's goal of offering users the opportunity to speak Chinese anytime and anywhere through their mobile devices.

Chinada's success shows how companies are increasingly harnessing technology to teach languages. It also highlights the huge interest among South Koreans in learning Chinese as they eye business and employment prospects in the world's second-largest economy.

Jee Sungeun, Chinada's global CEO, said: "The world has entered a new era when almost everything is mobile-first. The younger generation is also tech-savvy. By offering app-based online courses, people can use their spare time to learn Chinese in an easy and affordable way."

This year, South Korean adults are expected to spend 7 hours 36 minutes a day on average using digital and traditional media. Mobile usage accounts for the biggest proportion, taking up 37.1 percent of total daily media time, according to research company eMarketer.

Liu Shili, who lives in Shenzhen, Guangdong province, runs a Chinese-language teaching channel on YouTube with her boyfriend in South Korea. In about a year, the channel-which targets South Korean learners-has gained nearly 150,000 subscribers.

A recent video of her opening an oyster containing pearls at a workshop in Shanghai garnered nearly 500,000 views in a week. "Videos showing Chinese culture are always the most popular ones on my channel," Liu said. "In the comments section, many people said they were impressed by the rapid development of Chinese cities."

To meet the rising demand and also to differentiate itself, Chinada uses a "situational teaching method" and recruits more than 1,800 local residents in 16 Chinese cities as teachers to act out different scenarios. This approach has attracted widespread attention from people interested in China or its language, with more than 70 percent of the users being office workers. In January, Chinada announced a record daily revenue of 50 million won ($43,230).

In 2017, Chinada launched the first Chinatan Camp in the upscale Seoul district of Gangnam, not only for face-to-face Chinese-language teaching, but to create a space for students to experience Chinese culture. Seven such camps opened within two years.

Courses focus on areas such as speeches by Chinese internet industry leaders-including Alibaba's Jack Ma and Tencent's Ma Huateng-how to use WeChat, and even activities such as tasting food in local Chinese restaurants.

"Instead of speaking Chinese by sticking rigidly to grammar, we want to allow our students to speak the language naturally and make them feel as if they are in China," Chinada's Jee said in fluent Chinese.

Jee, who lived in China for more than 30 years and worked for LG Group, South Korea's fourth-largest conglomerate, said learning Chinese is more about knowing the country, rather than just the language.

Maeng, from KACLE, said, "Language is the carrier of culture and the process of learning can promote cultural exchanges."

Noting that China promotes its language and culture worldwide through the Confucius Institute, a public organization affiliated with the Ministry of Education, Maeng said the institutes play important roles in cross-cultural communications, as they provide students with opportunities to learn about Chinese people and the country. South Korea is home to the world's first Confucius Institute.

"Communication between South Korea and China will continue to develop in a more comprehensive and detailed way… and the trend of learning Chinese in South Korea will be maintained steadily," Maeng said. He added that South Koreans no longer learn the language for basic daily communication, but for more advanced and professional reasons.

Maeng said South Korea and China can further cooperate on cultural exchanges through academic research, film and television productions, as well as people-to-people exchanges such as organizing international meetings and talent training.

Liu, from Shenzhen, hopes that with support from South Korean netizens, she can make her YouTube channel more diverse by reaching audiences worldwide. Last month, she also launched an eponymous mobile app for learning Chinese.

Liu's videos are usually about 10 minutes long. After uploading them, she submits the dialogue in Chinese, Korean and also in pinyin. "Reading netizens' comments is the happiest time for me, especially when I see people saying every day that they have completed the homework I gave them in the videos," she said.

After the number of her subscribers reached 20,000, Liu began to receive invitations to cooperate with Chinese-language education institutions and companies interested in China. But she still feels it is important to focus solely on the channel.

Jee said that with the aim of making Chinada a leading global Chinese-language education institution, the company is in talks with partners in Vietnam and Indonesia to introduce its teaching methods.

Acknowledging that the online education market in China is booming with startups such as VIPKid, Jee is open to cooperating with Chinese companies to encourage new ideas and jointly build an internationalized business model.

VIPKid, which operates from Beijing and is one of the world's most valuable online education companies, connects more than 70,000 English-language teachers in North America to give one-on-one lessons to hundreds of thousands of children, mostly in China.

"It doesn't necessarily need to be just about learning Chinese," said Jee, who hopes to launch offline "lounges" in China as language exchange spaces for people learning Chinese, English and Korean.

Liu is a former international student in South Korea. During her time there, she received a great deal of help from her South Korean schoolmates in learning Korean, a key reason she wants to help people in the country to learn Chinese in return.

Hoping to showcase "the real China", Liu combines teaching Chinese with scenes from daily life, such as shopping at an unmanned convenience store, having a traditional Chinese head massage and ordering food via WeChat.

In recent decades, the Chinese-language education industry has matured, with the main teaching platforms extending from universities to numerous private language institutions in South Korea, said Maeng, who is also president of the Asia-Pacific Consortium of Teaching Chinese as an International Language.

The popularity of learning Chinese began to flourish in South Korea in 1992, when the two countries formally established diplomatic relations.

"Many words in Korean actually originated from Chinese," said Maeng, who is also a professor in the Chinese Language, Literature and Culture Department at Hankuk University of Foreign Studies in Seoul.

South Korean students comprise the largest foreign student group in China, and vice versa, according to the Chinese embassy in Seoul. Last year, the number of students sitting the Hanyu Shuiping Kaoshi, or Chinese Proficiency Test, in South Korea exceeded 110,000-more than in any other country.

Maeng said, "China has risen to be the world's second-largest economy, so more and more South Koreans feel the need to study the language (for more opportunities)." He added that the trend of learning Chinese has a solid base in South Korea due to its close geographical location, trade and economic relations, and people-to-people exchanges with China.