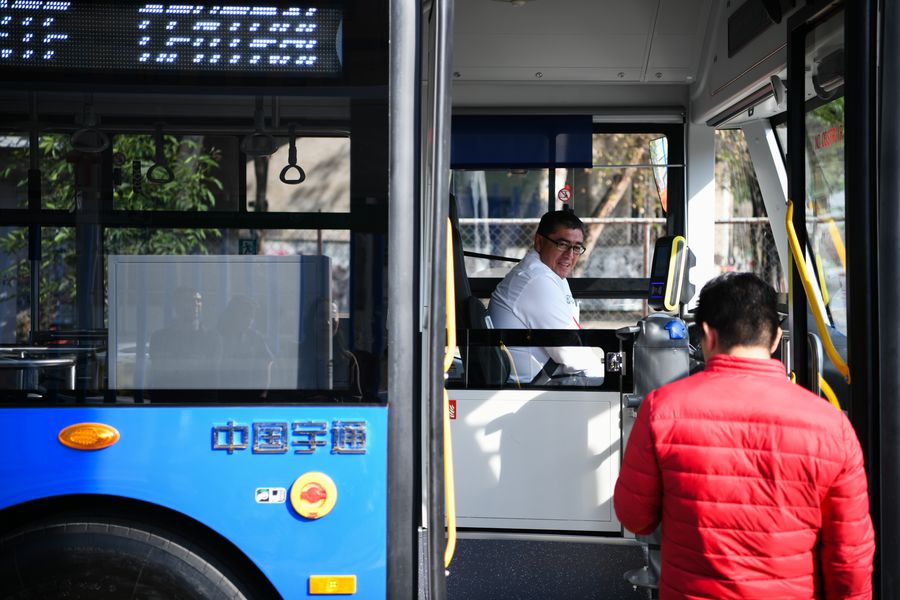 A driver of a trolley bus manufactured by Chinese company Yutong talks with a passenger in Mexico City, Mexico, on Jan. 17, 2020. (Photo: Xinhua)

MEXICO CITY, Feb. 20 (Xinhua) -- "I was surprised by the service," Chilean Cristobal Velasquez recently said of Chinese ride-hailing app Didi, which in a short time has gained a firm foothold in Latin America.

"While it's a relatively new app (here), it has spread quickly in (Chile's capital) Santiago and throughout the whole country," offering a "safe and economical" alternative to standard ride-sharing services, said Velasquez.

Didi is a prime example of the kind of technology-driven cooperation China is spearheading in Latin America today.

Andres Borquez, director of the Chinese Studies Center at the University of Chile, described Didi as the face of the "new wave" of Chinese cooperation in Latin America "based on the development of sophisticated products and services" to promote "the development of innovations and solutions for smart cities."

From the southern tip of Argentina to Mexico, Chinese technology is helping boost productivity and raise standards of living with innovations in transportation, agriculture, renewable energy, e-commerce and other sectors.

In Mexico City, a fleet of 63 Chinese-made trolley buses are propelling the capital towards cleaner electromobility.

Manufactured by Chinese company Yutong, the buses began circulating in early January along one of the city's main arteries.

These modern units can run for 75 km on battery power, should overhead cables fail to operate, and emit no pollutants, an important factor given that Mexico City is one of the most polluted urban areas in the world, according to the World Air Quality Index.

The trolley buses are part of Mexico City's "Trolebici" project, a 35 million-U.S.-dollar scheme to improve cycling and pedestrian infrastructure.

City Mobility Secretary Andres Lajous said that the Chinese-made vehicles were the best value for a city looking to improve commuter services.

The buses fit into Mexico City's plans for future changes to its transportation network, as "they consume less electricity, and they have obstacle detectors and special alarms that alert the driver to cyclists," Lajous said.

According to Ren Wenhui, commercial manager of Yutong in Mexico, the country's capital is the first Latin American city to use the trolley buses, though the company's electric and gas buses are already present on streets in central Mexico, Argentina, Chile, Colombia, and Peru.

"I am confident that there will be more clients in the future," he said.

Andres Diaz Bedolla, a member of Chinese e-commerce giant Alibaba's team in Mexico, said "we believe that everyone can be part of an open, smart, integrated, cooperative economy that also benefits everyone."

Diaz recently led a panel discussion on e-commerce for some 50 business representatives in Mexico City, inviting them to join a free online community to receive consultancy.

The first Mexican product sold via Alibaba was avocado, which has been a great success.

Mexico registered some 303 million online purchases between January and September in 2019, a 53-percent increase over the same period of 2018, according to official data.

"We are going to replace tons of carbon dioxide emissions with green energy through this plant, as many international organizations have already recognized," said Luis Gonzalez, technical adviser at Shanghai Electric Power Construction (SEPC), the company leading the facility's construction.

In addition to helping Argentina meet its energy and environmental targets, "the plant is important for the progress of the families of the Puna (region), as it was built in an area that was practically free of development," Gonzalez said.

Led by SEPC and largely funded by the Export-Import Bank of China, Cauchari Solar Park is located atop a remote mountain peak 4,000 meters above sea level near Cauchari, a town in the province of Jujuy, which borders neighboring Chile and Bolivia.

Divided into three smaller parks with a generating capacity of 100 megawatts each, Cauchari features more than 1.18 million solar panels distributed across 800 hectares.

In neighboring Brazil, a bilateral initiative is underway to develop a variety of rice that will appeal to Chinese palates.

"Our type of rice is different from what the Chinese consumer prefers ... that is why we want to develop hybrid rice in Brazil, so that we can supply this grain to China," said Ivo Mello, a researcher at the Rice Institute of Rio Grande do Sul.

The initiative is another example of how China is applying technology to promote win-win cooperation.

The institute is working with the Hunan Rice Research Institute "so we can become a supplier to China in the future, especially by developing a rice that's to the taste of the Chinese people," said Mello.

Brazil and China are also cooperating in space.

The jointly developed China-Brazil Earth Resource Satellite-4A (CBERS-4A) was sent into orbit in December 2019, pushing forward aerospace cooperation between the two countries, according to the China National Space Administration.

The sixth satellite of a joint cooperation program, the CBERS-4A is designed to improve the Brazilian government's ability to monitor the Amazon rainforest and environmental changes.

According to Marcos Cesar Pontes, Brazil's minister of Science, Technology, Innovation and Communications, cooperation between China and Brazil has contributed to international economic and social development.

Tech-driven cooperation between China and Latin America has recently been kicked into high gear, said Luis Paulino, a professor at Sao Paulo State University's Faculty of Philosophy and Sciences.

"Throughout 2019, China and Latin America made progress in institutionalizing their ties through the Belt and Road Initiative (BRI), a proposal that represents major opportunities for expanding bilateral trade and investment," said Argentine academic Carla Oliva, coordinator of the China and Argentina Study Group at the National University of Rosario.

Paulino believes "this new model of cooperation is interesting for both sides" as it offers Latin America access to advanced technologies and techniques "to boost local production, job creation, and demand for local inputs."

Crucially, "Chinese investments, especially in the areas of infrastructure and logistics, are fundamental to improving the competitiveness of local companies and the productivity of the economy," Paulino said.

Chinese President Xi Jinping envisions greater cooperation as a means to build a community with a shared future for mankind, "a concept that underlines our common goals, such as tackling climate change, underdevelopment and poverty," he said, calling it "a very important contribution" to building "a more peaceful and just world."

Oliva echoed this comment, saying that the construction of a community with a shared future for mankind "is one of the great propositions in China-Latin America bilateral ties."

"In recent years, we have seen a notable increase in cooperation in strategic matters such as renewable energy, sustainable development, transportation networks and the application of new technologies," she said.

"All progress in these areas is designed to achieve mutual prosperity by spurring trade and creating jobs," Oliva said.