The operator of a video-sharing app popular with teenagers agreed to pay $5.7 million to settle federal allegations it illegally collected personal information from children . 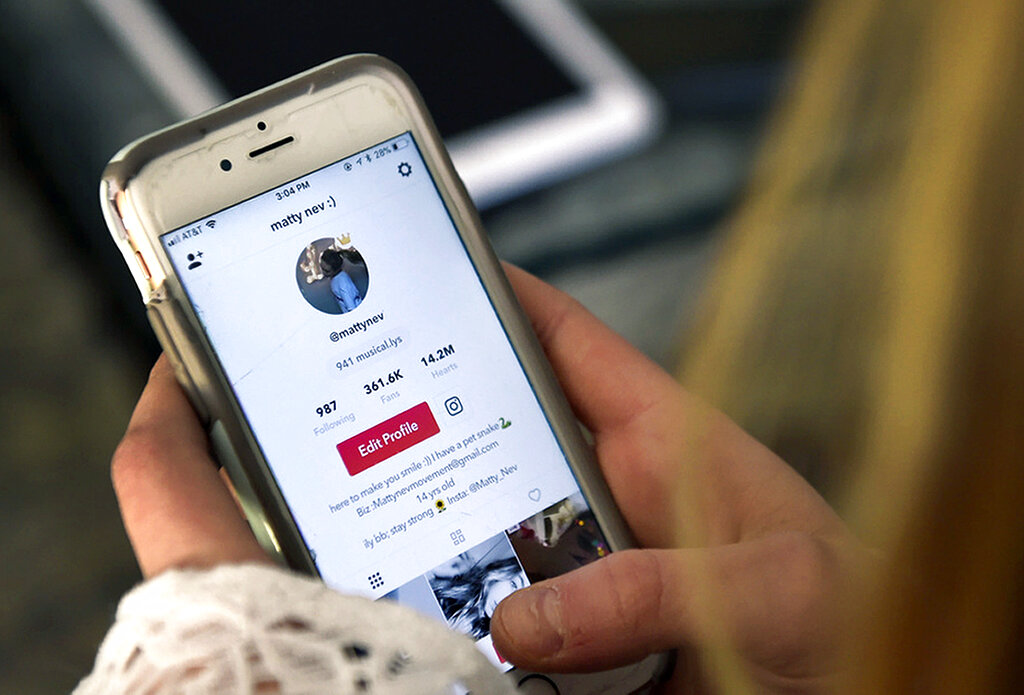 In this Feb. 28, 2018, Matty Nev Luby holds her phone and logs into the lip-sync smartphone app Musical.ly, in Wethersfield, Conn. (File photo: AP)

The Federal Trade Commission said the Wednesday penalty against lip-syncing app Musical.ly, now known as TikTok, is the largest ever obtained in a children's privacy case.

The FTC said the app violated the federal Children's Online Privacy Protection Act, which requires kid-oriented websites to get parents' consent before collecting personal information from children under 13.

The app changed its practices in 2017 to officially ban kids under 13 from joining, but it wasn't hard to find children as young as 8 or 9 sharing short videos of themselves on the platform.

"Just because you say it's intended for over-13 doesn't mean that it is," said Andrew Smith, director of the FTC's Bureau of Consumer Protection, in a conference call Wednesday.

Musical.ly, founded in 2014 and registered in the Cayman Islands, grew rapidly and operated out of offices in Shanghai and California. The FTC said the app has been downloaded by more than 200 million people worldwide, and 65 million in the US.

It built a devoted community of self-described "musers" who regularly shared lip-syncing, dancing, gymnastics or comedy videos. But the app also raised concerns among many parents, especially after news reports of adult predators using the app to contact children.

Smith said that along with failing to adequately seek parent's permission, the operators of Musical.ly didn't honor parents' requests for personal information to be deleted. Smith said the company deleted some under-age accounts but didn't delete their videos and profile information from its own servers.

Profile information often included email addresses as well as a child's name, age, school and picture. Until October 2016, one of the app's features allowed users to find nearby users within a 50-mile radius.

Beijing-based ByteDance Technology announced it was acquiring the platform in late 2017, and last summer folded Musical.ly into its own popular video app, TikTok, which is based in Los Angeles.

TikTok said in a blog post Wednesday that in conjunction with the FTC agreement, it's starting a separate app for younger US users with stronger safety and privacy protections. Children using the new app will be able to watch videos but won't be able to share their own videos, make comments, maintain a profile or message other users.

TikTok's intention to start a new app for children was troubling to Josh Golin, who directs the Boston-based Campaign for a Commercial Free Childhood.

Golin and other privacy advocates were also underwhelmed by FTC's record fine, arguing that big companies like ByteDance will see it as merely the cost of doing business.

Massachusetts Democratic US Sen. Edward Markey, who authored the decades-old privacy law the FTC's complaint was based on, said in a statement Wednesday that the fine "is not high enough for the harm that is done to children and to deter violations of the law in the future by other companies."

Children's advocates have pushed the FTC to investigate whether other companies, including Google's YouTube, are similarly violating children's online privacy.

The FTC said its Musical.ly investigation was sparked in part by a referral from the Better Business Bureau's Children's Advertising Review Unit, a group set up by industry to regulate itself.