Telecom defrauders to be banned from internet services for 5 years 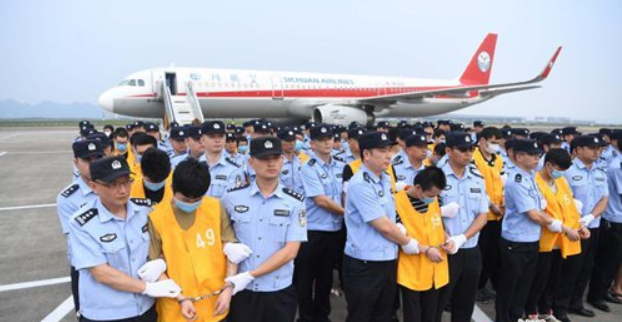 63 telecom fraud suspects, repatriated from Cambodia, arrive at an airport in Southwest China's Chongqing Municipality, June 26, 2019, under the escort of police. The suspects are part of a group of 73 people caught in a joint China-Cambodia police operation earlier this month. The suspects allegedly made phone calls to people on the Chinese mainland cheating victims out of money in dozens of cases involving more 5 million yuan ($730,000). (Photo:  Global Times)

People suspected of telecom fraud, personal information infringement and money laundering will be listed as "bad credit" accounts and restricted from applying for new telecommunication services for up to five years, says a regulation released in East China's Fujian Province.

According to the regulation, bad credit accounts refer to those that use telephone, text messages, the internet and other information transmission media to defraud, break credit card management, violate personal information, launder money or commit other crimes.

The suspects will be restricted from getting new telecom services for between 1 and 5 years.

During the restricted period, they can only keep one phone number and are banned from revoking the number to get a new one.

Public security authorities across China have launched a campaign to crack down on telecom fraud until October 31, the Ministry of Public Security said in June.

A total 44,000 telecom fraud cases were uncovered from January to May.

The ministry asked public security agencies to hunt for fugitives using conventional and technological means as well as to enhance their capability to counter new types of crimes.