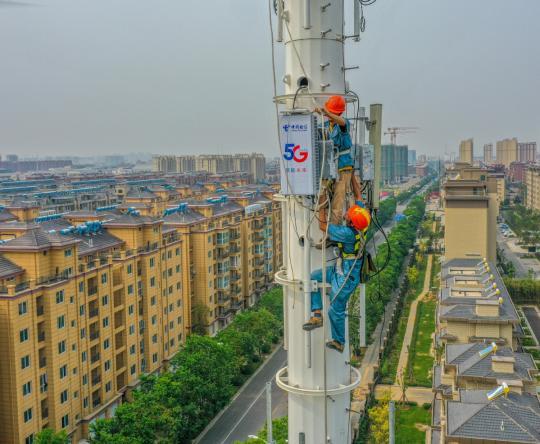 Chinese companies have started research into"6G", the next-generation telecommunication technology that will likely succeed 5G. They are working to prepare for a fully internet-connected world.

Currently, there is still no universally accepted definition for 6G, the wireless technology that is expected to have far lower latency, higher speed and more bandwidth than 5G.

One of its key characteristics would be that it can enable the integration of space-air-ground-sea communication technologies, company executives and experts said.

At the two sessions that concluded earlier this month, Yu Shaohua, a deputy to the 13th National People's Congress and an academician of the Chinese Academy of Engineering, said there is a pressing need for China to promote the development of future emerging technologies during the 14th Five-Year Plan period (2021-25).

More efforts are needed to accelerate the research and development of technologies such as 5G and 6G, he said.

Ren Zhengfei, founder of Huawei Technologies Co, said in an interview last year that the company has been undertaking parallel work on 5G and 6G.

But 6G is in a nascent phase, and there is still a long way－at least 10 years－to go before any commercialization, Ren said.

For its part, Chinese smartphone maker Oppo said in 2019 that it would invest 50 billion yuan ($7.7 billion) over the next three years on R&D. One of the focus areas listed in Oppo's research budget is 6G.

Chen Mingyong, CEO of Oppo, said at the time the company has "the faith of sharpening a sword in 10 years" and that it "will ramp up the push to build our own technical moat".

In November 2019, the Ministry of Science and Technology announced that China had entered the global 6G race, and has established two dedicated offices, one for related policymaking and the other for technical details. The latter group comprises 37 experts from colleges, research institutions and enterprises.

As early as in 2018, Miao Wei, then minister of industry and information technology, the nation's top industry regulator, said in an interview that the nation has started R&D of 6G around the end of 2017.

"As mobile communication technology advances rapidly, it not only connects people with people but links machines with machines as well as machines with humans. That is why, we had to rush into 6G research. We want to prepare for such a world," Miao said.

Lyu Tingjie, vice-president of the China Information Economics Society, a Beijing-based research institute, said Chinese companies' pioneering efforts in 6G R&D can help the world have a better understanding of the technology, and help push theoretical innovation that can explain what the technology can do in the future.

Currently, it is still not known for sure how fast 6G can be, with some experts estimating it could be somewhere in the region of 100-500 gigahertz, about 100 times faster than even the most modern 5G efforts.

He Ming, a senior engineer at the Chengdu Institute of Research and Development at China Mobile, the nation's largest telecom operator, said in an article that 6G is expected to have an unprecedented level of capacity and latency, which will extend the performance of 5G applications, besides expanding capabilities of futuristic applications across wireless cognition, sensing and imaging.

Despite the promising description, experts warn that more efforts are needed first to overcome technical hurdles in basic research, hardware design, and their possible impact on the environment, before talking about any prospects of commercializing the 6G technology.