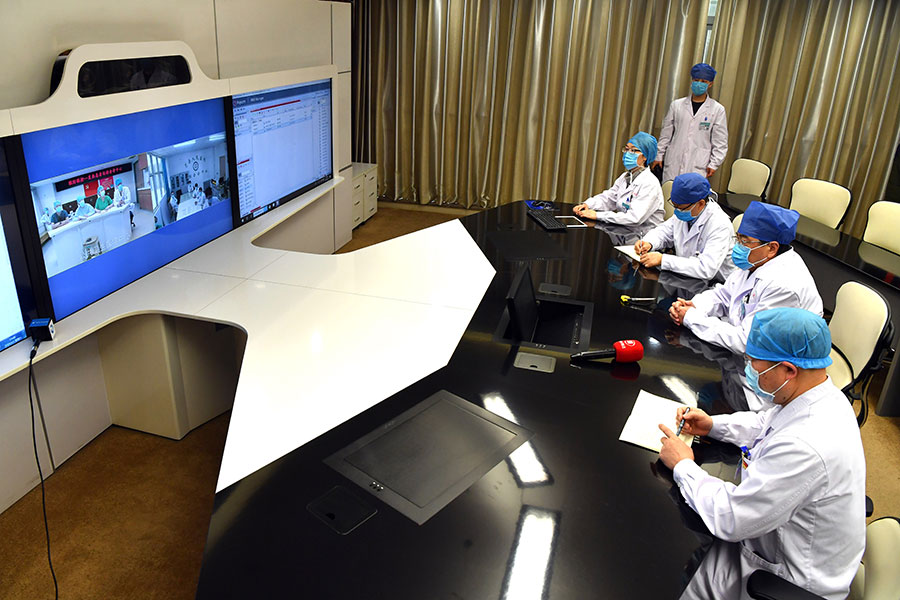 Zhang Jiaqi, a 27-year-old information technology professional in Beijing, was woken up by the sound of an alarm clock from an online group chat. She immediately washed her face, put on her makeup and wore a coat.

"Our team holds a video conference each morning these days, as we have adopted the remote mode of work due to the novel coronavirus outbreak. I discuss with my boss and colleagues about the work plan for each day," she said, adding their work can be done through the internet. "It is a good way to prevent the gathering of people at the office."

Working from home has become a new trend for companies nationwide to ensure the normal work of employees and reduce crowds in public places, as many Chinese regions have postponed the resumption of normal business activities due to the novel coronavirus outbreak.

On Feb 3, the first Monday after the Lunar New Year holiday, nearly 200 million people worked from home via DingTalk. A surge in demand for video conferencing services at 9 am caused a temporary disruption in DingTalk, the company said on its official Weibo account, adding the service resumed operation before noon. Moreover, 10,000 servers have been expanded to cope with the massive influx of users.

Most of the provinces, municipalities and autonomous regions including Beijing and Shanghai have issued notices that ask enterprises, except for those involved in key sectors, not to resume their work before Feb 10, and employees are encouraged to adopt remote work as a way to curb the rapid spread of the epidemic.

Tencent Cloud, the cloud computing unit of Tencent Holdings Ltd, has ramped up its capacity to offer users free and unlimited-time cloud video meetings for up to 300 participants until the end of the virus outbreak, as part of its efforts to promote remote business communication. Tencent Meeting, a communication software, also includes filters for users to beautify their appearances or blur their backgrounds on live videos.

WeLink, Huawei's smart teamwork platform, said that 15,000 enterprises opened new WeLink accounts on Sunday, and the average number of enterprises that have opened such accounts in the latest week is growing by 50 percent every day.

The company said new enterprise customers will maintain a relatively rapid growth as a large number of people return to big cities and more companies tell employees to work from home.

ByteDance's team collaboration platform Feishu is offering free remote office and audio and video meetings for its users until May. The office suite also provides functions like instant communication, calendar, and a cloud-based collaborative document platform.

According to the Qianzhan Industry Research Institute, the market size of China's smart office industry was about 23.4 billion yuan ($3.3 billion) in 2018, up 20.8 percent year-on-year. The figure is expected to reach 48.6 billion yuan in 2024, with a compound annual growth rate of 12.4 percent.

Zhang Zhouping, a senior analyst with the Internet Economy Research Institute of China E-commerce Research, said that remote work has become the most preferred alternative working method for many enterprises amid the current outbreak, as more people stay indoors and avoid public places.

"At present, enterprises are facing an increasingly severe competitive environment, along with rising labor costs. The demand for efficiency improvement and cost reduction will drive the growth of the enterprise services market," Zhang said, adding online offices can effectively alleviate the demands of enterprises and drive their digitalization push to some extent.

The telecommuting penetration in China is still low, but it is growing steadily, with huge development potential, said Zhang Xia, an analyst with China Merchants Securities.