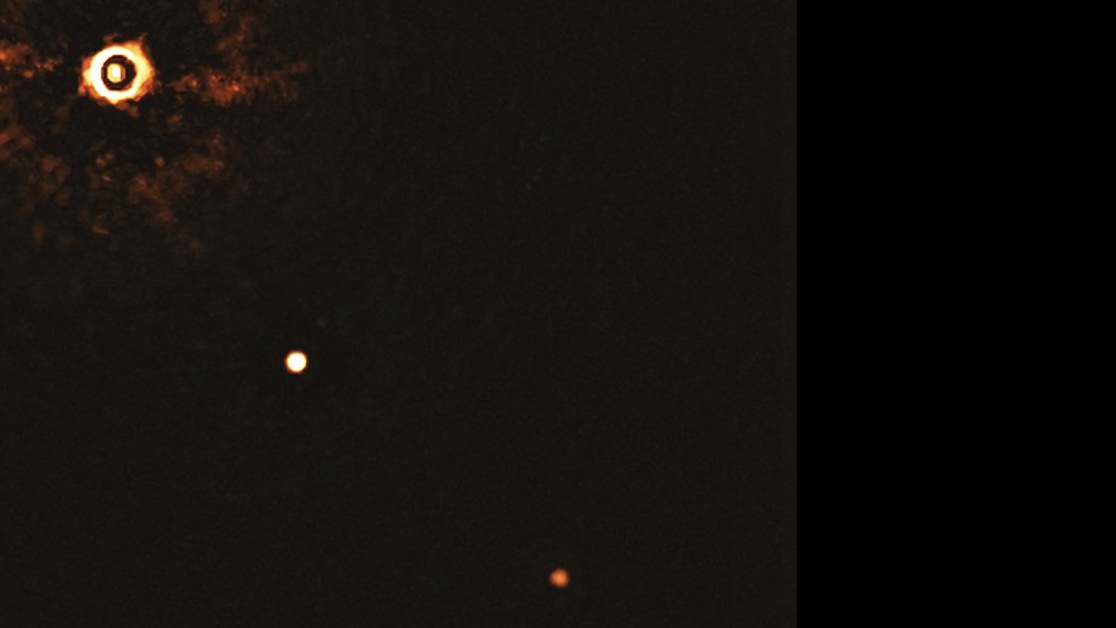 For the first time, a telescope has captured a family portrait of another solar system with not just one, but two planets posing directly for the cameras while orbiting a star like our sun.

This baby sun and its two giant gas planets are fairly close by galactic standards at 300 light years away.

What makes this group shot so appealing is it's a "very young version of our own sun," said Alexander Bohn of the Netherlands' Leiden University, who led the study.

Bohn said he was "extremely excited" about the discovery. "This is the first time astronomers were able to capture such a shot," he said in an email.

The observations can help scientists better understand the evolution of our own solar system.

Astronomers typically confirm worlds around other stars by observing brief but periodic dimming of the starlight, indicating an orbiting planet. Such indirect observations have identified thousands planets in our Milky Way galaxy.

It's much harder and less common for a telescope to directly observe these so-called exoplanets. To directly spot two of them around the same star is even rarer. Only two multi-planet solar systems have been spotted using the direct method, both with stars quite different than our sun, according to the observatory.

Of the 4,183 exoplanets confirmed to date, only 48 of them have been directly imaged – just one percent, according to NASA statistics.

Direct imaging provides humanity's best chance to detect life outside our solar system, if it exists, Bohn said. By observing light from the planets themselves, the atmospheres can be analyzed for molecules and elements that might suggest life.

The work published in Wednesday's Astrophysical Journal Letters reveals "a snapshot of an environment that is very similar to our solar system, but at a much earlier stage of its evolution," Bohn said.

The two newly discovered gas giants around this young star orbit at a much greater distance than Jupiter and Saturn do our sun – requiring a few thousand years to complete one revolution, or calendar year. They also weigh in with greater masses than our own outer planets.

The researchers took multiple images of this youthful solar system over the past year to verify the findings, while reviewing older data. A disk on the telescope known as a coronagraph blocked the starlight, exposing the two much fainter planets.

Future instruments like ESO's Extremely Large Telescope, still five years away, should be able to detect even smaller, less dense planets. The main mirror will span 128 feet (39 meters), more than four times the size of the Very Large Telescope, making it the "the world's biggest eye on the sky," according to the ESO.

For now, there is no evidence that this young star has more planets, but "it is certainly possible and they might just be too faint," Bohn said.