TECH Tests to start on launch of space station

Tests to start on launch of space station 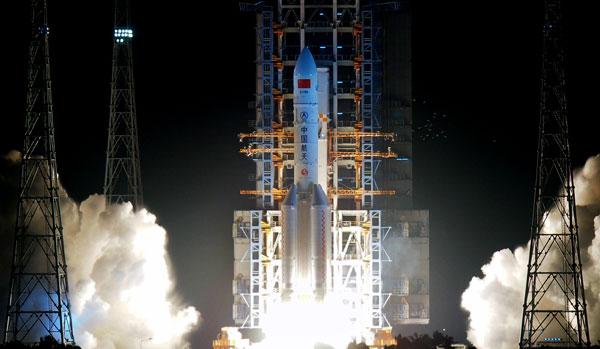 China will start preparatory tests for its manned space station mission in the second half of this year, according to the China Manned Space Agency.

The agency said in a statement on Monday that the core module of the space station, as well as a Long March 5B carrier rocket and payloads to be carried by the rocket's maiden flight, will be transported to the Wenchang Space Launch Site in the island province of Hainan to conduct tests.

After those drills, the Long March 5B rocket will launch from the Wenchang site for the first time when appropriate, the agency said, without giving an exact date.

Sources close to China's manned space program said that after the maiden flight, Long March 5B rockets will be tasked with lifting parts of the nation's first manned station into space, where those parts will be assembled by astronauts.

The space station's core module and a Long March 5B are under construction, the agency said, adding that it is also selecting and training astronauts for the mission.

According to government plans previously made public, China will start putting together its first manned space station around 2020, when a Long March 5B will put the station's core module into orbit.

Other components and astronauts will later be ferried to the core module to assemble the station.

The space station is expected to be built and become fully operational around 2022 and is set to operate for about 15 years, according to the China Academy of Space Technology, the contractor for the station's development and construction.

In 2024, it will likely become the world's only space station if the United States-led International Space Station is retired that year as planned.

The multimodule station, named Tiangong, or Heavenly Palace, will be mainly composed of three components - a core module attached to two space labs - having a combined weight of more than 90 metric tons, the academy said.

Information from the China Manned Space Agency shows the core module, Tianhe, or Harmony of Heavens, will have three parts - a connecting section, a life-support and control section, and a resources section. It will be equipped with three docking hatches reserved for visiting manned or cargo spacecraft, and two berthing locations used to connect with space laboratories. There will also be a hatch for astronauts' extravehicular activities.

The module will be 16.6 meters long with a diameter of 4.2 meters. It will be central to the space station's operations as astronauts will live there and control the entire station from inside it. The module will also be capable of hosting scientific experiments.