TECH The future is virtually here

The future is virtually here

Immersion in another world will allow people to enjoy a universe of possibility, China Daily reports. 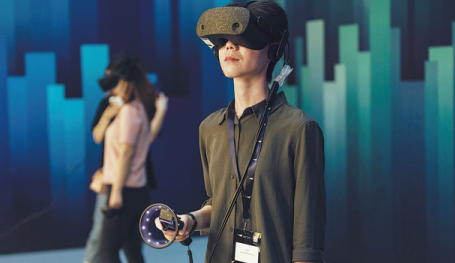 Visitors of the Sandbox Immersive Festival get a taste of virtual reality during their visit to the event that was held in Qingdao, Shandong province last month. (Photo:China Daily)

For Ted Schilowitz there is no looking back. The past is another country and the only borders he is worried about are those of the imagination. The futurist at Paramount Studios starts every day in the realms of virtual reality. No passports required.

Schilowitz, from the United States, sees VR as the ability to immerse people into a new world where even smartphones will eventually be replaced.

"In the near future, mixed reality on WeChat may actually come true," he says at the second edition of Sandbox Immersive Festival, in Qingdao, Shandong province, held from June 24 to 27.

SIF is a cross-media event that showcases immersive content from emerging talent and worldwide established studios.

According to SIF director, 34-year-old Lou Yanxin, the festival aims to become a hub of innovation and creativity for the extended reality industry, providing new opportunities for talent in Asia.

Lou believes that the audience attending this year's event felt more immersed when watching VR films because the technology has improved immensely in the past year.

"More interactions were possible in this year's screened VR films, such as using the hand shank, sound and eye tracking to interact with the characters in the films," says Lou.

Lou hopes to bridge the gap between content producers and technicians. "Some storytellers have creative ideas, but they don't know how to realize them. On the other hand, when a technician figures out a new interaction method, he or she doesn't have a proper story to present it."

Lou says he believes VR has huge potential as people, regardless of national boundaries, have the need to be emotionally attached with stories.

Funding, as in so many spheres, is a problem facing both domestic and international VR professionals, he says. Consequently, a project-pitching event at SIF sought to attract investment for new projects and ideas.

One project attracted widespread praise and was appropriately titled Beyond the Eye.

Liu Chengyang, presenter of the project, says it shows characters in the VR film walking each day with their eyes glued to their smartphones.

Their life is in black and white. But when they happen to be distracted from the phone, they step onto a beautiful, traditional Peking Opera stage to interact and engage with the performers in vibrant colors.

According to Liu, this VR film will allow people onto the stage to see how Peking Opera performers act.

The VR film is to be made by Noitom, a technology company that focuses on motion capture. Dai Ruoli, 40, co-founder and CTO of Noitom, says it's part of their three-year project to digitalize Peking Opera with VR.

"Our goal is to digitalize all elements of Peking Opera, including the opera plays, theaters, costumes, props, instruments and the performers," says Dai.

"Last year was the first year of our project, and we tried different technologies to record the opera and the stage, and this year we are using the most appropriate technology to record more elements."

According to Dai, there are 42 scanning points to capture actors' facial expressions, and the computers will then synthesize them into digital images.

"Even for the beards used in the operas, there are a couple dozen types of them, and we hope to record as much as we can to make an encyclopedia of Peking Opera," he says.

Dai says recording all the elements is the first step. The next step is to use the materials to interact with the audience, especially the younger people, thereby attracting them to the intricacies of Peking Opera to ignite passion for the old art.

"Beyond the Eye is a trial project and we hope to get the audience immersed into Peking Opera, through an experience they could not get by watching on TV screen or off the stage," says Dai.

Lin Shixian, 37, producer of Nostos, shared the story of how his team designed an open-world multiplayer VR game for NetEase.

"Most computer games put players into an enclosed space, waiting for the enemies or zombies to fight, but since VR can immerse audience into an entire world, we think that the player should be able to walk along and interact with other players," says Lin.

Nostos builds a post-apocalyptic oriental world featuring breathtaking natural environments inspired by the classic Anime style. Players can explore the mysterious world around them as it nears the end of its days.

Lin has 10 years' experience in game development, especially in multiplayer online games. He says it's more difficult to tell a story in a VR game because the players cannot be controlled as they can move around freely.

"So we design several characters and set different goals for each character to lead them to explore the world," says Lin. "It's an open world, so there are more stories for us to write."

The team started designing the game in 2017, and it made its Western debut during the Gamescom show in Cologne, Germany in August. Its first demo attracted more than 800 VR players.

According to Lin, the game will be released worldwide at the end of this year.

Yue Li, industry analyst at Greenlight, a VR and augmented reality market intelligence company, says according to their annual industry report, in 2018 there are around 9,900 XR offline experience stores worldwide. The number will likely increase to 26,000 by 2023.

"The offline XR stores include a VR experience store, cinema, theme park, arcade game store and entertainment center, and in China, we have around 5,400 in 2019," says Yue. "We believe the number will increase to more than 10,000 by 2023."