CHANGSHA, Oct. 22 (Xinhua) -- The third-generation hybrid rice developed by Yuan Longping, the "father of hybrid rice," and his team underwent its first public yield monitoring from Monday to Tuesday and achieved high output.

The final yield of the tested variety, G3-1S/P19, came to 1,046.3 kg per mu (about 667 square meters), based on two plots of land in Qingzhu Village under the city of Hengyang in central China's Hunan Province.

"One of the most important characteristics of the third-generation hybrid rice is that it has a shorter growing period," said Qian Qian, deputy director of the China National Rice Research Institute.

Qian said some previous high-yielding hybrid rice varieties in China took 160 to even 180 days from sowing to harvesting, while the figure was shortened to around 125 days for the new variety.

"A shorter growth period can reduce the use of pesticides and fertilizers, thus reducing cost and improving production efficiency," Qian said. 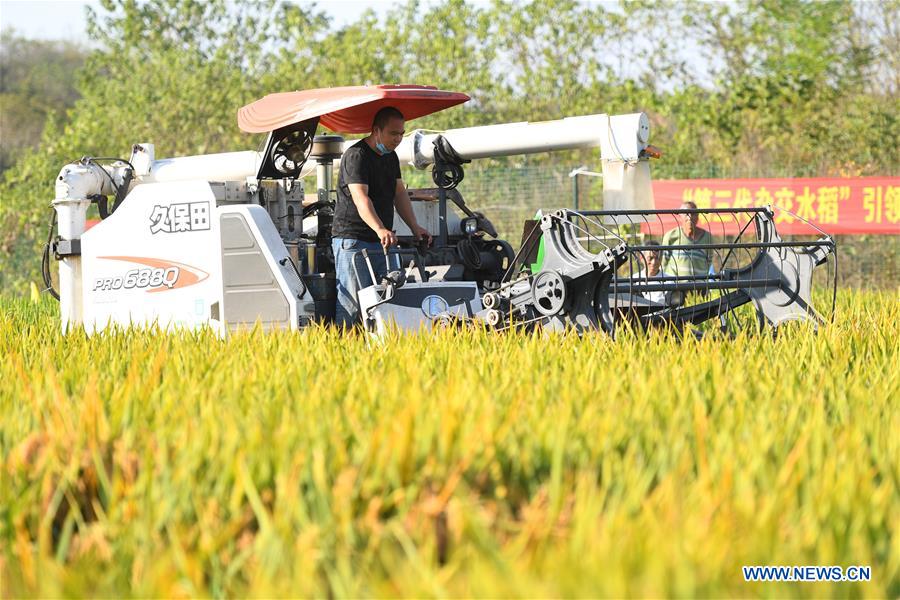 A working staff drives a tractor to harvest the third-generation hybrid rice at a demonstration base in Hengnan County of Hengyang City, central China's Hunan Province, Oct. 21, 2019.

Unlike the previous two generations that required a large amount of water and fertilizers as well as demanding growing conditions and technological support, the third-generation hybrid rice is easier to be cultivated by ordinary farmers.

The soil, altitude and climate of the test site were not "ideal conditions" carefully selected beforehand but were close to the paddies of ordinary farmers, according to Zhao Bingran with Hunan hybrid rice research center.

The whole process was organized by the Hunan Society of Agronomy under the supervision of experts from the Chinese Academy of Agricultural Sciences, the China National Rice Research Institute, Hunan's agriculture and rural affairs department and multiple Chinese universities. 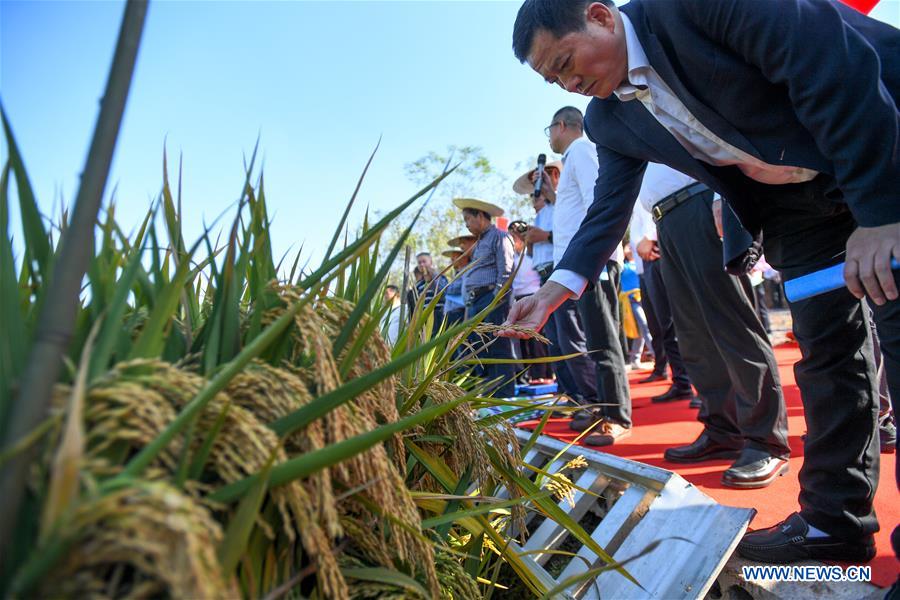 An agricultural expert checks the third-generation hybrid rice on a plot of land at a demonstration base in Hengnan County of Hengyang City, central China's Hunan Province, Oct. 21, 2019.

At present, China's average yield of rice is about 500 kg per mu. Ordinary farmers can produce 600 kg to 700 kg of rice per mu by growing some excellent second-generation hybrid rice varieties, said Li Xinqi, a researcher with Hunan hybrid rice research center.

"However, under the same planting conditions and environment, the yield of the third-generation hybrid rice could reach 800 kg per mu," Li added.

"We hope to promote the planting of 100 million mu of the third-generation hybrid rice in China in the short term and increase grain production by 20 billion kg, and apply the technology into the research of sea rice," Li said. "In the medium and long term, we hope to increase the planting area of hybrid rice by 70 percent worldwide."

At present, Yuan's team has nine third-generation hybrid rice combinations under trial, which are expected to achieve commercial seed production in the following three to four years.

"The third-generation hybrid rice has the comprehensive strength to promote a greener and more sustainable development of China's rice production with higher quality and yield," Yuan said.