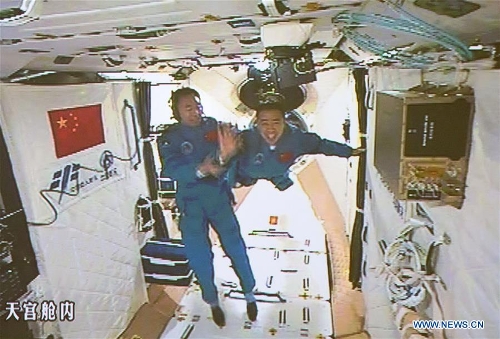 China's space lab Tiangong-2 successfully left orbit and re-entered the atmosphere on Friday night in a controlled manner after more than 1,000 days in service, with a small amount of debris falling into a designated security area in the South Pacific Ocean and most of the spacecraft burned in the atmosphere.

"Tiangong-2 space lab has completed all of its planned and extension tasks," Zhu Zongpeng, chief space lab designer, said in a press release sent from the main project developer, China Academy of Space Technology under the China Aerospace Science and Technology Co (CAST), to the Global Times on Friday.

According to the developer, Tiangong-2 had a designed operation life of two years, and had been operating in orbit for over 1,000 days.

Though they had been operating longer than designed life, the research platform and all payloads onboard Tiangong-2 were still in good condition, and the propellant carried by the space lab was also sufficient to support its flight in orbit for several years.

"Considering multiple factors, including security and the reliability of the space lab in orbit, we have to choose to de-orbit the space lab," Zhu said.

Launched on September 15, 2016, Tiangong-2 is an improved version of Tiangong-1 and also China's true first space lab. It successfully tested refueling and the 30-day stay of Chinese astronauts, the longest in China's manned space exploration history.

Tiangong-2 accommodated two astronauts for 30 days in 2016 and hosted a series of cutting-edge science experiments, such as quantum key distribution, a cold atomic clock and gamma ray burst observation.

"Tiangong-2's voluntary retirement is meant to eliminate all risks," Zhu said, "otherwise, the in-orbit reliability of the space lab will decline as the extended service stretches further longer than it was originally intended. And once some anomalies occur, Tiangong-2 would uncontrollably fall back to the atmosphere, and some parts might not be completely burned, with its debris falling to the ground, posing a threat to people."

To make sure the controlled de-orbit took place in a designated time and location, and to ensure the security of the ground, Tiangong-2 took a two-step strategy for its controlled de-orbit: first, lower the space lab to an elliptical orbit of 200 kilometers, then, second, descend it to an elliptical orbit of 70 kilometers before its re-entry to the atmosphere, Zhu said.

Fourteen cutting-edge experiments covering physics, space science and applications had been conducted, and the space lab carried as many as 51 payloads weighing over 600 kilograms, according to a statement the China Manned Space Engineering Office released in September 2018.

"The space lab gained valuable experience in key technologies required for a space station, such as those used in life-support systems and in-orbit control, some of the tech was developed at home, which means China's space exploration is becoming more independent," said a Beijing-based space exploration expert who has close information on the lab.

Aside from world-level technologies and experiments, the space lab also offered a more cozy environment for astronauts, with fitness facilities and Bluetooth equipment allowing astronauts to listen to music, according to an expert who requested anonymity.

It brings China one step closer to its mission of establishing a space station, he said.

China is building its own space station, which is expected to be operational around 2022.

To lay the groundwork for its construction, China will carry out joint tests and exercises by the end of the year to prepare for the maiden flight of the Long March-5B, according to the China Aerospace Science and Technology Corporation.

In the next 10 years, China will play a bigger role in the peaceful exploration of space focused on artificial satellite, manned space flight and space control, said the Beijing-based analyst.

Since the launch of its first satellite in 1970, China has achieved one feat after another in space.

China launched the Chang'e-4 probe on December 2018. Its lander and Yutu-2 made the first-ever soft-landing on the far side of the moon on January 3.

China also has a busy schedule for other space activities. It will send more than 50 craft into space via over 30 launches this year, including the launch of the Long March-5 carrier rocket and the Chang'e-5 lunar probe.

During the process, China has never been reluctant to share opportunities brought by its scientific and technological achievements, hoping to contribute to the building of a community with a shared future.

Recently, China announced with the United Nations nine international science experiments that will be conducted on its planned space station.

The Chinese Academy of Sciences has provided more than 1.8 billion yuan ($268 million) for science and technology projects in association with the Belt and Road Initiative since 2013, benefiting many Asian and African countries.

The development of China's space exploration also comes with public enthusiasm, especially the young generation, as the country's astronauts and space organizations are exploring innovative ways to interact with the public.

During the summer vacation, space-themed exhibits and activities are being held across China. The Xinhua News Agency reported that over 310 million visits were made to more than 21,000 science popularization events during the week.

Before the re-entry of the Tiangong-2 space lab into atmosphere, many Chinese net users said "welcome home" to the Sina Weibo account of the space lab, which has over 382,000 followers.

"Mission accomplished and welcome home. Thanks for taking us one step closer to the era of the space station," wrote Weibo user "Kejikong."