Tianhe astronauts use free time to watch ping-pong and exercise

Chinese astronauts on board the Tiangong space station have enjoyed watching matches from the Tokyo Olympic Games, according to the China Manned Space Agency. 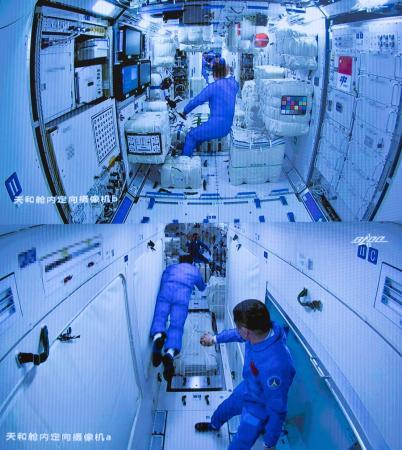 "Technically, we can connect them to live broadcasts, but they've chosen to watch transmitted recordings during their time off, because there are so many tasks for them to complete," the agency said in an article on its WeChat account on Friday. "So far, they have watched several ping-pong matches and diving events."

The astronauts are using a set of specially designed machines, including a treadmill and an exercise bike, in accordance with personal exercise plans, the statement explained, adding that they have gradually increased their daily amounts of exercise since their three-month space journey began in mid-June, to reduce the negative effects of microgravity on their bodies.

As of Friday morning, the Shenzhou XII crew had spent 50 days in a low-Earth orbit at an altitude of about 400 kilometers in Tiangong's core module, which is named Tianhe, or Harmony of Heavens. They are scheduled to remain in space until mid-September, when they will return to Earth.

They launched on June 17 aboard a Long March 2F carrier rocket that blasted off from the Jiuquan Satellite Launch Center in northwestern China. The astronauts entered Tianhe later that day, after the spacecraft docked with the module, becoming Tianhe's first inhabitants.

The largest and heaviest spacecraft China has ever built, Tianhe is the first and central component of the Chinese space station, which is called Tiangong, or Heavenly Palace.

The Shenzhou XII mission, China's seventh manned spaceflight, is the first crewed mission of the Tiangong program, which aims to finish construction of a three-component space station in low-Earth orbit before the end of 2022.