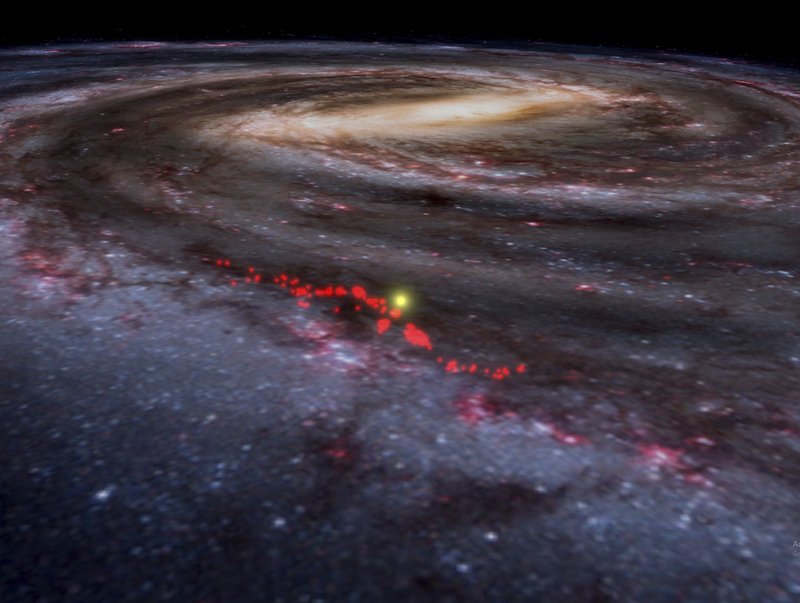 This illustration provided by Harvard shows data from the “Radcliffe Wave,” indicated in red, superimposed on an artist’s rendering of Milky Way galaxy. (Photo: AP)

Astronomers have discovered a titanic wave of star-forming gases practically right under our noses in the Milky Way.

Harvard University scientists reported Tuesday that this massive structure has been hiding out in the Milky Way galaxy’s spiral arm closest to Earth.

The researchers were building a 3-D map of our galaxy’s interstellar matter, using a star census gathered by Europe’s Gaia spacecraft when they spotted the wave-shaped structure.

It’s an astounding 50 quadrillion miles (85 quadrillion kilometers) long and it’s home to tens of thousands of baby stars, with the potential for countless more stellar births, according to the paper published in the journal Nature.

All these stellar nurseries, or star-forming blobs of gas, are interconnected, according to Harvard’s Catherine Zucker. Together, they form this wavy, gassy filament, why this shape is still a puzzle.

The sun is just 500 light years away from the wave at its closest point, according to lead author Joao Alves.

The team was shocked by the discovery. No one expected “we live next to a giant, wave-like collection of gas — or that it forms the local arm of the Milky Way,” Harvard’s Alyssa Goodman said in a statement.

What’s more, the structure dubbed Radcliffe Wave — after a Harvard institute — contains stellar nurseries once thought to belong in a ring-shaped band around the sun. The wave contains gases equivalent to 3 million times the mass of the sun.

“It has completely transformed our understanding of our galactic `neighborhood,′ ” Zucker said in an email. It “has been right in front of our noses ... for millions of years, but we could not see it clearly until now.”

Launched in 2013, the Gaia spacecraft has measured the distances to close to 1 billion stars in our galaxy, providing a precious, colossal data base for uncovering huge structures like the Radcliffe Wave, according to scientists.

Zucker said by charting the 3-D positions of nearby stellar nurseries, “we have finally been able to see our corner of the Milky Way in a new light, revealing this gigantic wave before us.”

The wave was invisible in 2-D, requiring new 3-D mapping techniques to be detected, the researchers said at the American Astronomical Society’s meeting in Hawaii.

The next step, she said, is to figure out its origin and determine whether there are more massive waves lurking out there.