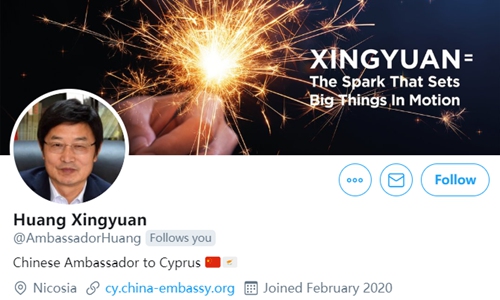 After being suspended for two days, the official Twitter account of Chinese Ambassador to Cyprus Huang Xingyuan was reactivated on Wednesday, with Twitter explaining that Huang's account had been flagged as spam by mistake.

In a statement that the embassy provided to the Global Times, Twitter replied to Huang, saying, "We're writing to let you know that we've unsuspended your account. We're sorry for the inconvenience and hope to see you back on Twitter soon."

Twitter later explained the reason was that it has systems in place that find and remove multiple automated spam accounts and Huang's account was mistakenly flagged as spam.

Chinese embassies and experts slammed the double-standard act of US social media platform that boasts for freedom of speech while serves the US' political interest after Twitter accounts of the Chinese Ambassador to Cyprus and the Chinese Embassy in Sri Lanka were suspended without any specific reason.

On Monday, Twitter suspended the official account of Chinese Ambassador to Cyprus Huang Xingyuan and the account of the Chinese Embassy in Sri Lanka, without giving a specific reason.

Ambassador Huang told the Global Times on Tuesday that "suspending accounts just for their different voices is a face-slapping act in a country boasting for 'democracy' and 'freedom of speech,' and exposes the US' narrow mind-set and lack of confidence."

Huang opened his account in March and has grabbed wide attention with more than 1,000 followers and interacted actively with officials of Cyprus including the country's president Nicos Anastasiades. His most popular tweet was read 25,400 times and received 420 likes and 141 retweets.

The account of the Chinese Embassy in Sri Lanka was restored after it made solemn representations twice to the platform. The embassy issued a statement on Tuesday saying "freedom of speech must be honored and it should not be misused to spread groundless, racist or hate speech, nor be treated with 'double standards.'" Twitter later said the suspension was a "systematic mistake."

Shen Yi, director of the Research Center for Cyberspace Governance under Fudan University in Shanghai, slammed the platform's double standard, saying that "Twitter appears as a public platform but has a private nature, which serves only the interests of the US as a US company."

Amid the COVID-19 pandemic, Chinese diplomats are fighting back against groundless accusations and stigmatization of China through sharper diplomatic tones and hard-line comments.

Chinese Foreign Ministry spokespersons Zhao Lijian and Hua Chunying have been active in engaging with other users and post almost every day about data and fact-based Chinese war against the pandemic.

Shen told the Global Times on Tuesday that China, with an emerging role in the world and becoming more active in diplomacy, may have to get prepared to cope with such unequal treatment in the long term and further boost the communication tactics of telling China's story to the world.

China has been playing an active role in helping the international community and offering Chinese experience in the fight against the COVID-19. But some anti-China groups continue to spread rumors and distort facts, trying to blame the pandemic on China to cover their own failures, he said.