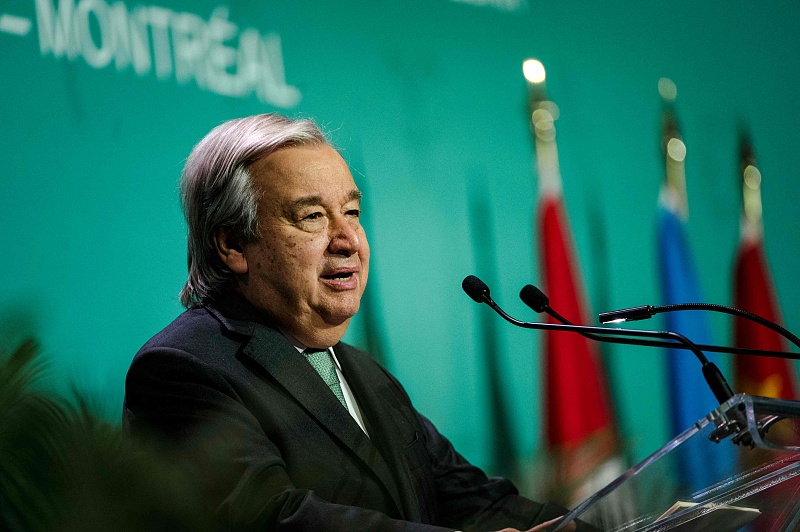 UN Secretary-General Antonio Guterres speaks during the opening ceremony of the 15th meeting of the Conference of the Parties at Plenary Hall in Montreal, Quebec, Canada, December 6, 2022. (Photo: CFP)

Developed countries must provide bold financial support for the countries of the Global South as custodians of the world's natural wealth, UN Secretary-General Antonio Guterres said on Tuesday.

Addressing a ceremonial opening of the 15th meeting of the Conference of the Parties (COP15) to the UN Convention on Biological Diversity, Guterres said international financial institutions and multilateral development banks must align their portfolios with the conservation and sustainable use of biodiversity.

"We cannot expect developing countries to shoulder the burden alone," he said.

The secretary-general also called for the implementation of national plans that would divert subsidies and tax breaks away from activities that can destroy nature and the recognition and protection of the rights of indigenous peoples and local communities.

He argued that the private sector should recognize that profit and protection go hand-in-hand.

"It is up to us to accept responsibility for the damage we have caused and take action to fix it. The deluded dreams of billionaires aside, there is no Planet B," said the secretary-general.

Huang Runqiu, China's ecology and environment minister, told those gathered that China will continue to exert its leadership in promoting substantial results in negotiations on the post-2020 global biodiversity framework.

The second part of COP15, following the first phase held last year in the Chinese city of Kunming, will officially kick off on Wednesday. China continues to hold the presidency. Under the theme of "Ecological Civilization: Building a Shared Future for All Life on Earth," negotiators will set new targets and goals to arrest the alarming destruction of nature due to human activity.