TECH US takes on China in electric vehicle push

US takes on China in electric vehicle push 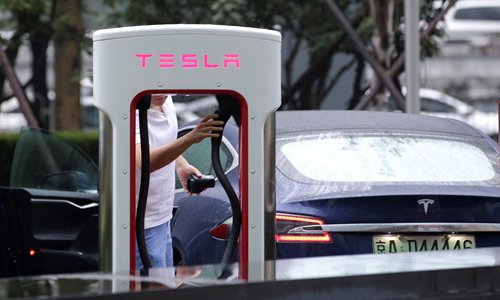 A man finishes charging his Tesla car at a charging point outside Tesla China headquarters in Beijing, China. (Photo: VCG)

US government officials plan to meet with executives from automakers and lithium miners in early May as part of a first-of-its-kind effort to launch a national electric vehicle supply chain strategy, according to three sources familiar with the matter.While Volkswagen AG, Tesla Inc and other electric-focused automakers and battery manufacturers are expanding in the United States and investing billions in the new technology, they are reliant on mineral imports without a major push to develop more American mines and processing facilities.China already dominates the electric vehicle supply chain. It produces nearly two-thirds of the world's lithium-ion batteries—compared to 5 percent for the US—and controls most of the world's lithium processing facilities, according to data from Benchmark Minerals Intelligence, which tracks prices for lithium and other commodities and is organizing the Washington, D.C. event.US imports of lithium have nearly doubled since 2014 due in part to rising demand from Tesla, SK Innovation Co and others building battery plants in the country, according to the US Geological Survey."We need to find ways to more efficiently develop our nation's domestic critical mineral supply because these resources are vital to both our national security and our economy," North Dakota Senator John Hoeven, a member of the Senate's Energy and Natural Resources Committee, said in a statement to Reuters when asked about the upcoming meeting.Hoeven and Senator Lisa Murkowski, chair of the Senate's energy committee, have been invited to attend the meeting. Officials from the US Department of State, Department of Energy, Department of the Interior and the US Geological Survey plan to attend, according to two of the sources.As part of the effort, Murkowski is expected to introduce standalone legislation aimed at streamlining the permitting process for lithium and other mines, bolstering state and federal studies of domestic supplies of critical minerals and encouraging mineral recycling, among other topics, according to a source familiar with the matter.Some of those efforts were part of broader energy legislation in prior Congresses that failed, and Murkowski hopes that similar legislation will draw broader attention to the topic, according to the source.Game changersFive companies, including Lithium Americas Corp, are developing US lithium projects that plan to use new technologies to extract the metal from clays, bromine and even oil field waste, processes not common elsewhere and considered game-changing by some analysts. But not all of them have secured financing.If all five come online by 2022 as planned, the country would produce at least 77,900 tons of lithium carbonate equivalent each year, making the country one of the world's largest lithium producers. Lithium development projects have historically faced numerous obstacles, so that production number is far from guaranteed."Creating a domestic electric vehicle supply chain is the perfect blueprint to make America great again," said Jesse Edmondson, chief executive officer of US Critical Minerals, a start-up firm buying lithium mineral rights in the US Southeast.Representatives from Tesla, Ford Motor Co and General Motors Co plan to attend the Washington meeting and discuss with federal officials potential policy changes that could encourage development of a domestic supply chain to mine, process and supply lithium, nickel, cobalt and graphite for battery manufacturers and automakers, according to the sources.Tesla and GM did not respond to requests for comment.A Ford spokesperson said that the company regularly engages with stakeholders on various supply chain topics.Albemarle Corp and Livent Corp, two US-based companies that mine lithium in South America, also plan to attend, as do executives from the handful of lithium mines under development in the United States, according to the sources."We are looking forward to participating in a forum with policy makers and industry participants who are focused on ensuring the US remains a leader in the development of the electric vehicle industry," said Paul Graves, CEO of Livent, which has said it is eyeing expansion opportunities.Albemarle, which operates the only existing lithium mine in the US, declined to comment.Complex situation The one-day meeting will be divided into morning workshops focused on financing and permitting obstacles, with one-on-one afternoon meetings between regulators and industry executives, according to the sources."We're trying to make sure policymakers have an understanding of this complex situation," said James Calaway, chairman of ioneer, which is developing a lithium project in Nevada that also holds a large concentration of boron, used in a plethora of consumer goods.In Arkansas, Standard Lithium Ltd is developing a pilot project to extract lithium from the bromine waste of a Lanxess AG chemical facility."We have an opportunity to take a huge step forward in lithium production, and we want to support that," Asa Hutchinson, the governor of Arkansas, told Reuters.Hutchinson and some other US officials want US lithium projects to stand alone without financial support from the government, a potential impediment as financiers often look for even tacit government support before investing in new, unproven technologies."There's a real opportunity in the electric vehicle supply chain if the US wakes up," said Jonathan Evans, president of Lithium Americas, which is developing a lithium project in Nevada expected to open by 2022.