TECH Waning biodiversity may have role in dinosaur extinction

Waning biodiversity may have role in dinosaur extinction 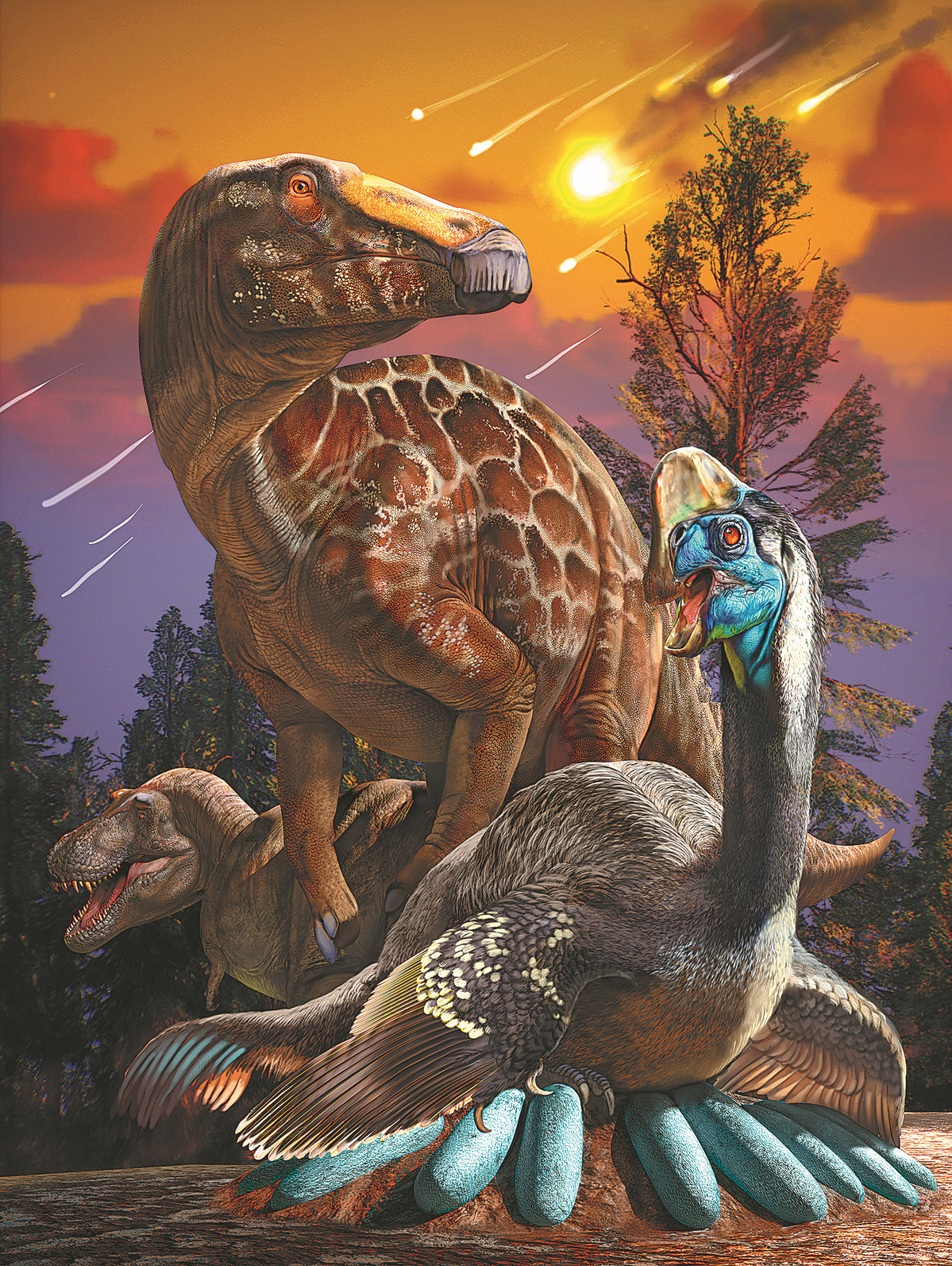 An artist's impression of three major dinosaurs living in Shanyang Basin of today's Shaanxi province during the late Cretaceous Period before their extinction. (Photo: China Daily)

The extinction of the dinosaurs could be attributed in part to a reduction in biological diversity, instead of being caused purely by major natural disasters, according to recent research.

The cause of the extinction of the dinosaurs 66 million years ago has long been a subject of debate in the scientific community. An asteroid collision with Earth and large volcanic eruptions are the most common views.

Recently, a research team has offered a new explanation after studying dinosaur eggs and eggshell fossils excavated from red sandstone in the Shanyang Basin of Shangluo, Shaanxi province, over the past seven years. The basin is one of the few continental basins in China suitable for research on dinosaur extinction during the late Cretaceous Period (about 145 to 66 million years ago).

Scientists collected about 1,000 samples and found that most of the eggs' mothers were of two types — oviraptorids and hadrosaurids — which matched the dinosaur bone fossils excavated there.

The fossils date from about 68 million to 66 million years ago.

The hypothesis means that the biodiversity of the species was low 2 million years before the extinction, experts said. "Although now the Shanyang Basin doesn't cover a large area, it connected surrounding basins during the late Cretaceous period for dinosaurs to migrate freely," said Han Fei of China University of Geosciences (Wuhan).

He added that research on dinosaur eggs in South China's Guangdong province and Western North America also reported similar results, and contributed to the conclusion that the biodiversity of dinosaurs was on the wane.

The results were published in the academic journal Proceedings of the National Academy of Sciences in September.

"To solve the mystery of dinosaur extinction, it's key to study the record of their existence on the Earth in terms of space and time," said Han, who is also the lead author of the paper, adding that dinosaur extinction was a gradual process instead of a sudden accident, which relates to the theory of the "co-evolution of creatures and the environment".

The research said that in the late Cretaceous Period, with a changing natural ecology, dinosaur biodiversity saw a continuous reduction, which weakened their ability to adapt to the environment and made it impossible for them to survive a major disaster, such as an asteroid collision or volcanic eruption. All elements combined led to their extinction.

About what led to the reduction in their biodiversity, Han said, "It's still a question scientists are trying to figure out.

"The research also helps human beings better understand the Earth and the natural laws, as well as remind us to respect nature and adapt to the changes in the natural environment."

The research was co-produced by China University of Geosciences (Wuhan), the Institute of Vertebrate Paleontology and Paleoanthropology and the Institute of Geology and Geophysics of the Chinese Academy of Sciences. More than 17 scientists and students participated in the study.

Wang Qiang, an associate researcher at the Institute of Vertebrate Paleontology and Paleoanthropology, retrieved the dinosaur eggs from the Shanyang Basin in 2013 and 2014. With more members joining, they conducted numerous on-site investigations and laboratory tests.

He added that eggs, as a special type of fossil, not only reflect dinosaur reproduction but also provide information about the environment they lived in, so they are an ideal material to study the ancient geology and climate while dinosaurs existed.

The team will further explore changes in the ancient environment and how they related to the biodiversity of dinosaurs, he said.