TECH What does the paperless security check-in at Beijing's new airport look like?

What does the paperless security check-in at Beijing's new airport look like? 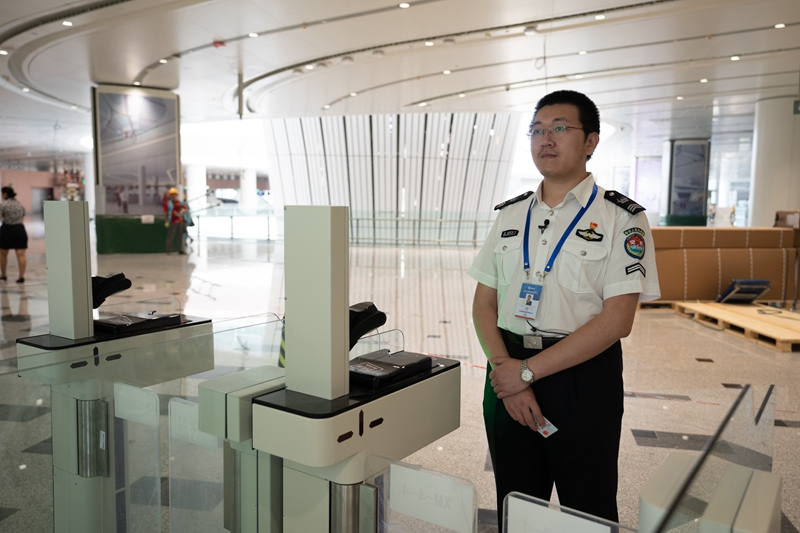 From the airport's terminal entry gate to the boarding gate, passengers will experience a  paperless, self-service journey.

On arrival at the security checkpoints in the airport, you will first come across a two-door automated verification gate. The system replaces the manual way of verifying a passenger’s credentials.

Unlike the traditional system at most airports, Daxing's verification gate is a four-in-one kiosk that can process your boarding information without human interference. You will only need to scan your ID and the machine will take care all the rest.

Since all your information, including boarding pass and passport details for international flights, have been stored online, the first door can retrieve them immediately for cross-checking with your ID.

Once step one of the ID verification is complete, the passenger will gain access to the second door where a camera will take a face picture. Then the machine will use facial recognition technology to double-check the information processed at the first gate against the new photo.

After clearing both gates, you will still have to go through personal security screening along with your carry-on luggage. But with the new system in place, the process has become much simpler.

There are separate bins for scanning items. A row of cameras alongside the conveyor belt takes the photo of the passengers along with their luggage. It helps to track the carry-on luggage in real time.

You don't have to keep an eye on your stuff during the process, which is closely watched by security personnel.

Item trays are equipped with chips, which help to promptly identify anyone found carrying prohibited or "suspicious" items. You will no longer hear an officer yelling "who is the owner of the bag?"

Besides, prohibited items can be identified by a dual view X-ray machine and delivered via a different scanning line to which security staff have easy access. Other passengers will no longer be required to open up their luggage and wait for a second check.

More interestingly, a millimeter  (MM) wave scanner will be introduced as an enhanced security measure without hampering the passenger experience.

Earlier physical pat-down searching and hand-held metal detectors are expected to be replaced by an advanced screening system featuring MM wave technology in the near future.

Without touching the human body, the scanner can spot concealed carry-on items under clothing, especially non-metallic objects and explosives that are usually missed by metal detectors. It can also picture shapes and sizes, and location on the body with a high accuracy and efficiency.

But the MM wave system will need a trial use at some checkpoints before its large-scale deployment.

Li told CGTN that after over one-year trial in Terminal 2 of the existing Beijing Capital International Airport, the new system has proven it can handle over 260 people per hour.

"Compared to 160 passengers in traditional security checkpoints, it is over 60 percent more efficient," he added.

According to the company, the new airport is equipped with 58 sets of machines, covering all security procedures of passengers.

It is the first time that such a large-scale intelligent security system has been applied in an airport in China, according to a Beijing Daily report.