TECH Where will AI take our children?

Where will AI take our children? 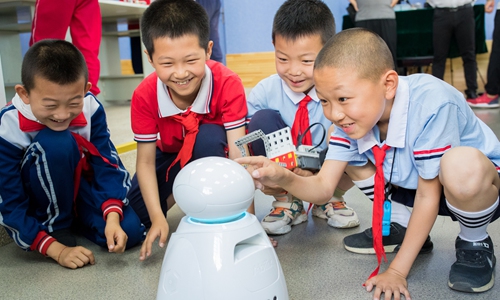 Reports of artificial intelligence (AI) products being used to "monitor" students on campus in China have shifted public discourse on technology regarding privacy and child development.

The global artificial intelligence market is expected to be valued at $71 billion by 2024 with a compounded annual growth rate of 26 percent over the next five years, according to the Artificial Intelligence Market Report: Trends, Forecast, and Competitive Analysis released in June.

The report specified the Asia-Pacific region is expected to witness the highest growth over the forecast period due to its adoption of the internet of things (IoT) and the increasing installation of smart home devices. The region's AI use will also be propelled by industrial automation in countries like China with applications in mass transportation, education, and e-payment platforms.

Chinese schools have gradually reintroduced AI-powered systems and products to relieve teachers from their job's more meticulous tasks, like paper inspection, and help them personalize learning for each student.

Rather than creating a single curriculum for all students, educators can use AI to provide a broad range of materials, drawing from a core curriculum but catering to students' specific needs.

While some experts pointed out that the application of technology in education is just one of many teaching tools, Chinese netziens have posed the possibility of AI in the classroom raising children to become "intelligent living robots."

Under China's exam-oriented education system, AI-powered products teach students in the same way teachers have traditionally taught. This can hardly be considered an innovation, Yang Dongping, the president of the 21st Century Education Research Institute, told the Global Times on Wednesday.

Yang said that he is more vigilant than hopeful of these products' impact on children.

About 19 percent of all educational projects that succeeded in attaining funding in 2018 in China was "AI plus education" projects. The figure increased by 12 percent compared to that in 2017, according to media reports.

A big data-powered personalized teaching system developed by a Chinese AI-powered speech recognition leader, iFlytek, has been implemented by more than 10,000 schools in China, according to the China Comment, a magazine under the Xinhua News Agency.

A home-education robot developed by iFlytek has become popular among Chinese parents, with more than 600,000 of the robots sold on China's Singles' Day shopping holiday on e-commerce platforms.

AI is undoubtedly promoting reform in the education sector, Gu Mingyuan, an expert at education from the Beijing Normal University of China, told the China Comment.

However, the essence of education will not change, which is aimed at increasing the quality of life rather than exam performance, Gu noted.

"Humans could only be educated by humans," Gu said, stressing that machines will not replace the spiritual impact teachers have on students.

Cai Guosheng, a teacher from a middle school in Anhui told the China Comment that AI helped him correct exam papers. His school's AI-powered machines release a report after grading assignments, which teachers can use to see which students are having difficulty and in what subject.

Yang Zhangpeng, public relations director of a branch of the US-based start-up BrainCo in Hangzhou, East China's Zhejiang Province, said that the performance of students in a primary school in Jinhua, Zhejiang, has apparently increased after using BrainCo's "mind-reading" headband for one year.

The headband records students' concentration performance and trains them to stay focused in class. The product sparked controversy over potential violations of privacy in late October following media reports. The company denied the accusation of a privacy leak, noting that only teachers have access to the reports, which could help them design more engaging lesson plans.

The company is enhancing the headband to help train and educate children with autism and hyperactivity, Zhang told the Global Times.

AI could only promote education when traditional teaching and thinking methods are reformed, Zhang Zhi, director of the Chiba Educational Technology Center, said to the China Comment.

The magazine said Chinese educational authorities are researching a plan to transform the education system and reform the country's education to promote the smooth integration of AI technologies into the classroom.

Lei Chaozi, director of the Department of Science and Technology of the Ministry of Education, said at a forum in August that education in the "smart era" will focus on cultivating students' creative and cooperative spirit to promote individualized and sustainable development.

"Computers only have chips, men have hearts. It's the heart where wisdom comes from. For the next 10, 20 years, every human being, country, government should focus on reforming the education system," Alibaba founder Jack Ma said at the Forbes CEO Conference in Singapore in October. "If we don't change the education system we are in, we will all be in trouble."

Ma suggested the education system should be changed to teach children how to "be a human" in the era of artificial intelligence.

He identified skills like music, dancing, painting, and sports as "very important" as these are the kinds of artistic and athletic pursuits that engage people's hearts, according to Business Insider.