TECH World Hepatitis Day: Learn more about the disease that threatens 1 in 13 Chinese

World Hepatitis Day: Learn more about the disease that threatens 1 in 13 Chinese

The World Health Organization (WHO) on Friday urged countries to scale up investments in eliminating hepatitis, a liver inflammation that is causing 1.4 million deaths globally a year.

It is one of China's major infectious diseases, and the country's hepatitis burden is the highest in the world, according to WHO.

Among the 325 million people worldwide living with viral hepatitis B (HBV) and C (HCV) – the most common cause of liver cirrhosis and cancer, about one-third of that population is in China.

Among the 100 million Chinese with HBV or HCV infection, about 9.5 million require urgent treatment because of advanced liver disease and the high risk of developing cancer.

WHO warned in 2016 that 10 million people living with chronic HBV in China will die by 2030 unless urgent action is taken to improve access to treatment. 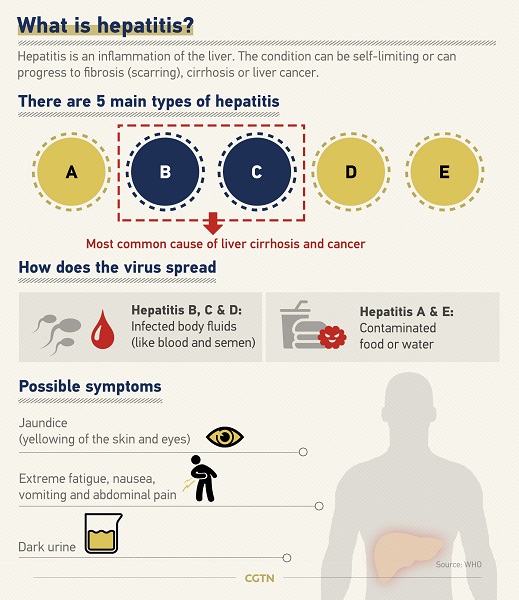 Statistics revealed that more than half of newly diagnosed liver cancer cases worldwide were recorded in China, and most of them are caused by HBV.

Nevertheless, most people with HBV infection in China are unaware that they carry the disease, making HBV infection a "truly silent epidemic," according to WHO. The same situation also applies to HCV carriers.

Though HBV remains the main cause for liver disease, the cases of HCV infection are on the rise in recent years, data from Chinese Center for Disease Control and Prevention (China CDC) show. 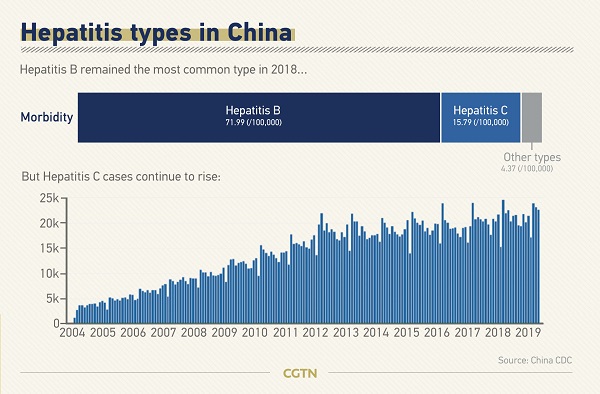 Hepatitis infections in China are more prevalent in the less-developed western regions, such as Tibet Autonomous Region and Qinghai Province.

China's economic powerhouse Guangdong Province also sees more incidences of hepatitis, especially HBV, due to its humid climate, high population density and some special diet and living habits that facilitate the breeding and spread of the virus. 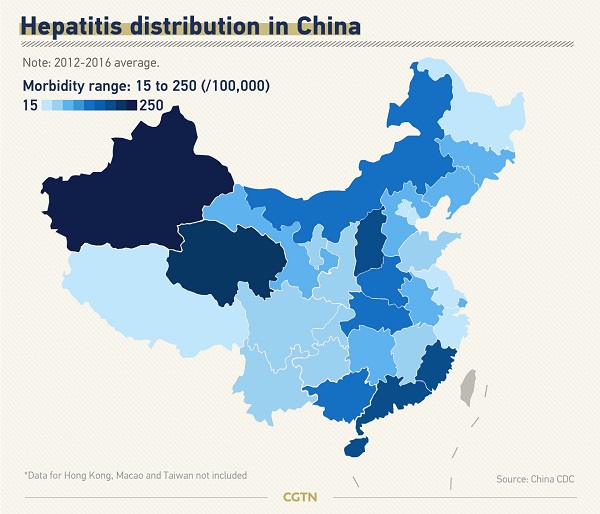 To deal with the HBV epidemic, China launched a childhood vaccination program in 1992, thanks to which chronic HBV among young children has decreased by 97 percent, with tens of millions of babies spared from infection.

In 2014, WHO awarded China for its historic reduction of hepatitis B among young children and pressing ahead with large-scale health sector reform. China also developed the world's first hepatitis E vaccine.

In the past decades, both mortality and fatality rates from hepatitis have decreased in the country.

In 2018, the reported incidence rate of hepatitis A registered a record low. 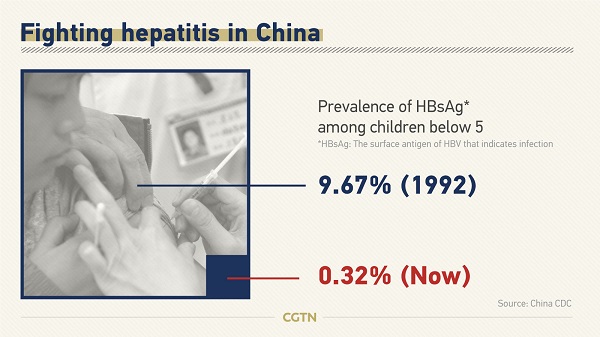 Despite great progress made in the fight against hepatitis in China, there is much more to be done, such as improving access to treatment and health care conditions in the less-developed regions.

"Today 80 percent of people living with hepatitis can't get the services they need to prevent, test for and treat the disease," said WHO Director-General Tedros Adhanom Ghebreyesus.

And although therapies to control viral replication and minimize mother-to-child transmission of HBV are now widely available, there is still no cure for the virus.

Considering the huge population base of HBV in China – nearly 90 million chronic carriers, which accounts for about a third of the global total – hepatitis remains a huge burden on the nation and poses a threat to its people.

What's more, the discrimination attached to HBV infection, especially in the workplace, remains a huge barrier.