World’s fastest ultra-light aircraft to be produced in China: report 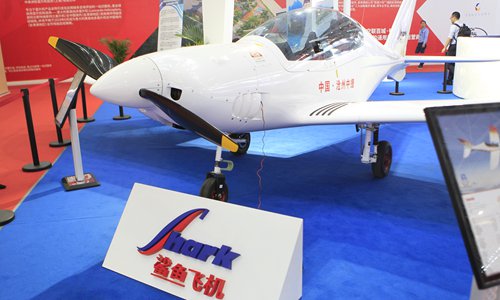 The Shark aircraft is on display at the Airshow China 2018 in Zhuhai, South China's Guangdong Province on November 7, 2018. (Photo: IC)

The Shark, the world's fastest ultra-light aircraft from Czech, which is scheduled to begin production in China next year, is expected to be a star at the 2nd China International Import Expo (CIIE) which runs from Tuesday to Sunday in Shanghai.

The deal to transfer production technology was signed by Czech and Chinese companies this year and is currently in the development stage which includes training Chinese employees, the Shanghai-based news website thepaper.cn reported on Sunday.

The production line in China will be launched in 2020, the report said.

With a speed of 300 kilometers an hour, the Shark is said to be the world's fastest ultra-light aircraft and has a range of 1,660 kilometers, the Beijing Daily reported in November 2018, when the aircraft was on display at the Airshow China 2018 in Zhuhai, South China's Guangdong Province.

As a tandem seat, the light plane made of advanced composite material featuring carbon fiber epoxy, the Shark is suitable for multiple purposes including flight training, sightseeing and as a private aircraft, according to exhibitors at the Czech booth at CIIE.

In 2017, the Civil Aviation Administration of China issued a Validation Type Certificate for the Shark, clearing a path for its production in China, thepaper.cn reported.