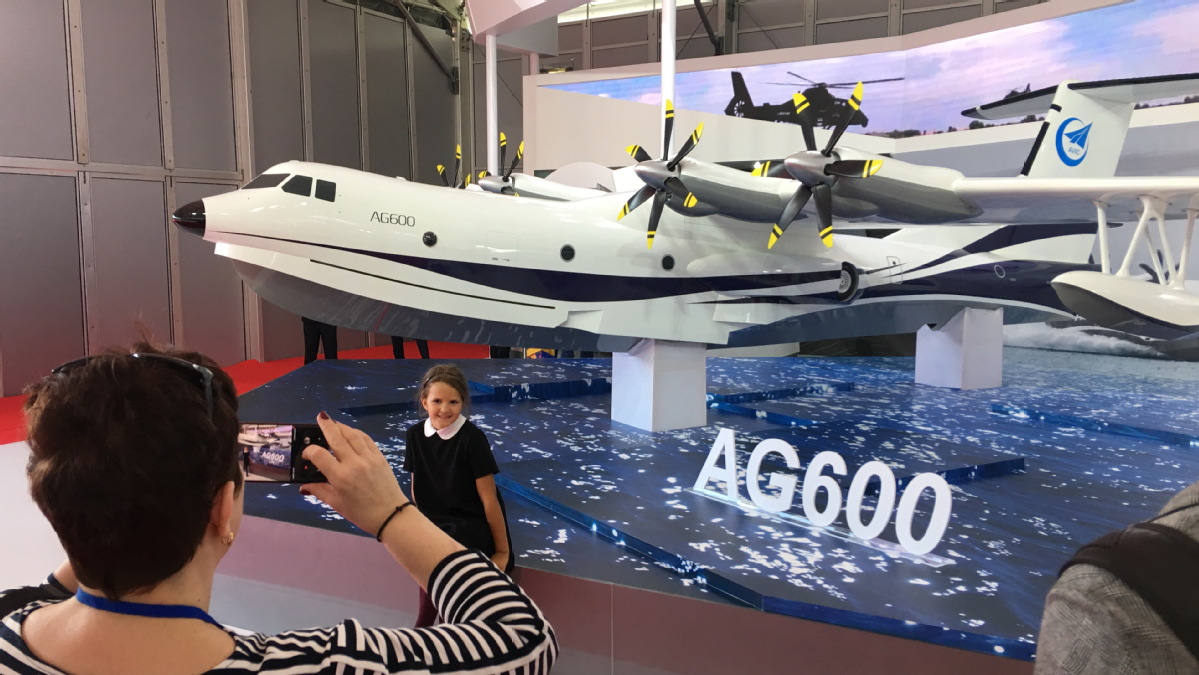 A large-scale model of the domestically developed Aviation Industry Corp of China AG600 Kunlong seaplane, the world's newest and largest amphibious aircraft, is displayed at the China Pavilion during the International Aviation and Space Salon 2019 that opened on Tuesday near Moscow. (Photo: Zhao Lei: China Daily)

A large-scale model of an AG600 is on display inside the China Pavilion at the International Aviation and Space Salon 2019 that opened Tuesday in Zhukovsky, a town near Moscow.

Aviation Industry Corp of China is the State-owned aviation conglomerate behind the aircraft.

"If the seaplane is put into service, it will be able to extensively reduce economic losses caused by natural disasters," Li Yang, an AVIC marketing manager for the AG600, said at the six-day Russian air show. "We hope it will contribute to international efforts in disaster relief and prevention and we will deliver the aircraft to clients in accordance with their requirements."

Li said mass production of the AG600 is expected to start in 2023 after the aircraft's scheduled receipt of all necessary certificates from the Civil Aviation Administration of China.

Two AG600 prototypes are currently undergoing tests. Designers and engineers are preparing for the first prototype to carry out sea-based flight tests, he said.

AVIC will start construction of four additional AG600 prototypes for testing in the near future, the company said.

Development of the AG600 was approved by the central government in June 2009. More than 10,000 researchers and engineers from hundreds of domestic institutes, enterprises and universities took part in the AG600 program. Construction of the first prototype began in March 2014 and was completed in July 2016.

The seaplane made its maiden flight in December 2017 in Zhuhai, Guangdong province, taking off and landing at an airport. Ten months later, it carried out its first takeoff and landing on water at Zhanghe Reservoir in Hubei province's Jingmen.

With a length of 37 meters and a wingspan of 38.8 meters, the AG600 is roughly the size of a Boeing 737. Powered by four domestically designed WJ-6 turboprop engines, it has a maximum takeoff weight of 53.5 metric tons. It is the world's biggest amphibious aircraft, surpassing Japan's ShinMaywa US-2 and Russia's Beriev Be-200.

The AG600 will mainly be tasked with aerial firefighting and maritime search and rescue operations. It can also be refitted to conduct marine environmental inspections, marine resource surveys as well as personnel and supply transport, AVIC said.

The aircraft is designed for land and water takeoffs and landings and has an operational range of about 4,500 kilometers. It can carry 50 people.

When assigned to fight forest fires, it can collect 12 tons of water from a lake or sea in 20 seconds and use it to douse blazes over an area of about 4,000 square meters, the company added.

Wang Yanan, editor-in-chief of Aerospace Knowledge magazine, said the AG600 may be of interest to countries with extensive coastlines or many islands because the seaplane is suitable for maritime operations as it is much faster and more flexible than ships.

Wang said the aircraft has much room for improvement including using more advanced composite materials or stronger engines that will further boost its range and carrying capacity.