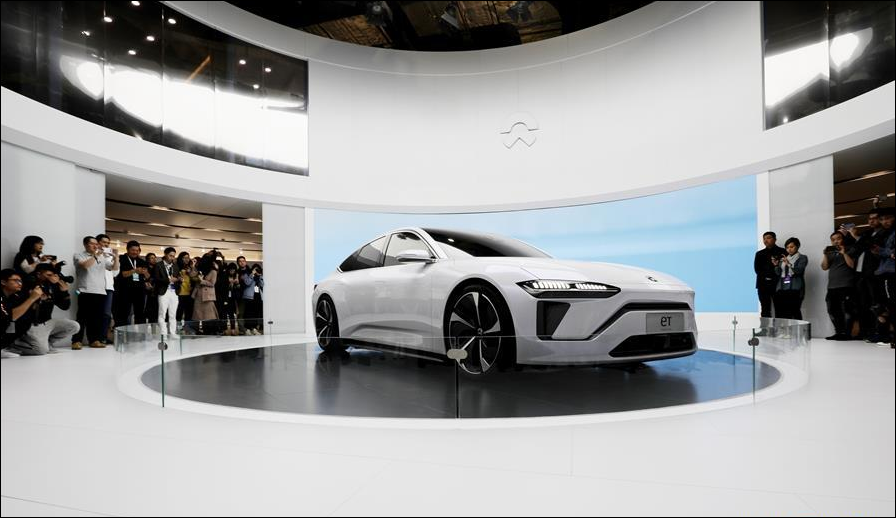 Global carmakers are making the Auto Shanghai 2019 a launch pad for their new energy vehicles (NEV), as the world's largest automobile market pins hope on NEV and AI for impetus, following last year's contraction in car sales, the first in 28 years.

Over 1,000 auto industry producers from 20 countries and regions brought their new models and concept cars to the Auto Shanghai 2019, which opened Thursday.

Nearly all traditional automobile producers brought their new NEV models to the exhibition, ranging from fuel battery-powered, plug-in hybrids to pure electric cars. The competition is especially fierce in the battle for shares of China's 1.5 million electric car sales forecast for this year.

Nineteen new energy brands including GAC NE, WM-Motor and Grove made their debut at the auto show during the exhibition's media days on Tuesday and Wednesday. Most are Chinese carmakers.

Japan's Toyota Motor Corporation made a global debut of two electric car models at the exhibition, both expected to go on sale in 2020.

The company said in recent years, it has introduced several flagship Toyota sedans into the Chinese market. Toyota will promote electric vehicles as well as hybrid cars in China this year.

The company graced the auto show with its famous hydrogen-fuel-cell vehicle Mirai.

Chinese firm Grove Auto Co. Ltd. debuted its new series of hydrogen energy vehicles. One of them will enter mass production in 2020. The company has clinched a deal to build an R&D center in Shanghai for developing hydrogen-fuel technologies.

The boom of the NEV exhibits at the show reflected an increasing competition in the NEV sector in the world's largest auto market. Some 298,900 NEVs were sold in China in the first quarter of 2019, up 109.7 percent from the same period in 2018, according to the China Association of Automobile Manufacturers (CAAM).

The government has vowed to spend heavily on infrastructure construction such as building electric charging and hydrogenation stations.

Taking Shanghai as an example, up to now, the total number of charging piles in the city has reached 210,000, basically meeting the demand for the city's 240,000 electric cars on the road. The municipal government has planned to add 50,000 to 80,000 charging piles every year from 2019.

Joachim Eberlein, managing director of Jebsen Motors, a Porsche dealer at the auto show, also noticed that Chinese customers are quite interested in NEVs, which is reflected in the high import numbers.

Pricewaterhouse Coopers (PwC), the world's leading professional services provider, predicted that by 2030, the percentage of electric vehicles against all new cars would reach 50 percent in China, 44 percent in the EU and up to 20 percent in the United States.

This year's Shanghai auto exhibition set up a special zone featuring "life on wheels of the future" for the first time, which showcases new technology including vehicle networking, driverless solutions, laser radars, smart chips and high-precision positioning and maps.

Carmakers have eyed automation, network connection, electrification and sharing as four key features of the future trend of the global automobile industry.

On Monday, SAIC Motor, China Mobile, Huawei and Shanghai International Automobile City jointly launched the construction of the "5G Smart Transport Demonstration Zone" in Shanghai, which is to be completed and open next year.

During the event, SAIC launched the world's first 5G Smart Networking vehicle, which will be mass-produced in 2020. It also debuted the third iteration of its intelligent driving technology.

"With a deep convergence of automotive, information and communication technology (ICT), intelligently-connected electric vehicles have emerged as a revolutionary development engine of the human society, with its impact going far beyond the two industries themselves," said Xu.

PwC predicted that the market for connected services in China would grow from 600 million U.S. dollars in 2017 to 39.5 billion dollars by 2030.

Zhang Jinhua, executive vice president and secretary general of the Society of Automotive Engineers of China (SAE-China), said China has taken a series of measures to promote the development of ICT, encourage the integration and cooperation among different industries, jointly tackle key technology issues and set industry standards and norms.

The market value of the ICV industry in China is expected to exceed 100 billion yuan by 2020, according to the Ministry of the Industry and Information Technology.

China's drive in connectivity, automation and electrification has brought opportunities to companies worldwide. According to Bosch, a leading global supplier of technology and services, which participated in the auto show, the company's sales of mobility solutions in China reached 81.7 billion yuan in 2018, with a growth rate of 2.9 percent.

China's fast growth in automobile sales came to a halt last year. Car sales in 2018 dropped by over 4 percent from a year earlier, representing the first decline in 28 years, according to CAAM data.

However, exhibitors at the show generally saw the slowdown as an opportunity rather than a risk.

Eberlein said the demand for high-quality vehicles is still strong in China. Younger generations are keen on premier brands and new models with high-end configuration, especially when they renew their transport tools.

"For Jebsen Motors, we are confident of meeting China's new trends in the automotive market together with the Porsche brand," he said.

In 2018, the added value of the automobile manufacturing industry increased by 4.9 percent year on year, and the main business income increased by 2.9 percent, which indicates that the industry has undergone the smooth adjustment in the upgrading of industrial structure, according to the Ministry of Industry and Information Technology.

The NEV market has seen a more fierce competition, as China opened up the market wider.

In January, U.S. electric carmaker Tesla started construction on its first factory in China, with an annual production capacity of 500,000 electric cars.

It was soon followed by the BMW Group, which announced plan to make China the company's global production base of NEVs. BMW's factory in Shenyang, capital of northeast China's Liaoning Province, is expected to mass produce the pure electric BMW car in 2020 for the global market.

By 2018, China's pure electric and plug-in hybrid vehicle sales accounted for 52 percent of the world's total, of which more than 90 percent came from independent brands, said Paul Gong, China Auto analyst of the UBS Investment Research.

He said Chinese NEV brands have gained a strong foothold in the market with their production scale. Some Chinese automakers also have an edge in the intelligent connectivity fields.

Bosch board of management member Markus Heyn said Chinese firms have been leading in the fields of electrification, automation, connectivity and individualization in the NEV market.

As of February 2019, Shenzhen-based BYD has delivered more than 50,000 pure electric buses worldwide, covering developed automotive markets in Europe, the United States and Japan. Its NEVs are sold in over 300 cities across 50 countries.