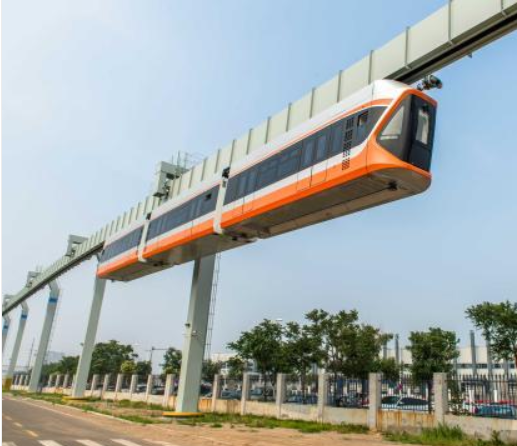 China Railway Science & Industry Group Corp (CRSIC) in Wuhan is developing a suspended monorail vehicle known as a "sky train", which is expected to be in operation by the end of year, cnhubei.com reported on Tuesday.

The report said that the train's main body is almost complete.

Designed similarly to subway train, the suspension train was built with each carriage to measure 11 meters long and 2.4 meters wide.

A one-kilometer railway line suspended 500 meters above the ground for trial operation is also under construction.

According to Wang Yinglin, director of CRSIC's New Railway Research Institute, the train can travel at a maximum speed of up to 70 kilometers per hour, making it the fastest of its kind in China.

Each train, comprising three or five carriages, is capable of carrying up to 300 or 400 passengers, respectively, with the total number of riders expected to reach 10,000 an hour.

"Compared with other railway transportations such as the underground subway, light rail or tram, suspended railway occupies less space, has a wider view and is also easier to arrange, which along with its strong climbing capability, make it particularly well-suited for the outskirts of big cities, as well as medium-sized cities and tourist attractions with heavy traffic," he said.

China is now the third country in the world to develop this kind of technology, after Germany and Japan.

A number of cities including Leshan in Sichuan and Hanzhong in Shaanxi provinces have put forward their plans to develop sky trains, while a suspension railway made by CRRC Qingdao Sifang Co., Ltd, began testing in 2017.