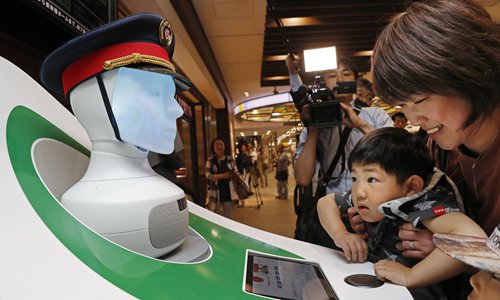 A company in Northwest China's Xinjiang Uyghur Autonomous Region is boosting robotics education and training to cultivate talent in artificial intelligence (AI) and advance robotics amid a rise in investment in the field.  Many kindergartens, primary and middle schools, and vocational colleges in Xinjiang have included robotics classes for students, Hao Wenyuan, a vice-general manager of a robotics education company called Milestone, told the Global Times on Monday.Hao said that the company is also developing an anti-riot robot and watchman robot for use in the air and on the ground to help protect neighborhoods, which will be used in 2021. He said that robots would partly replace human patrols.The movement comes amid the country's accelerated development in recent years in robots for manufacturing, disaster relief, security monitoring and military applications, which increased the requirements for robotics professionals and talent development.Urumqi, the capital of Xinjiang,  in May organized a science popularization month with the theme, "make China strong by developing science, benefit people by popularizing science," when the company was named a science popularization education base by the Urumqi Association of Science and Technology.As AI technology booms in China, using robots in education will help students know more about robots and develop high-tech skills for the future, said Zhang Yujun, a teacher at the Urumqi comprehensive practical education center for teenagers, told local media.The company not only provides robotics classes for teenagers, but also gives industrial robot workshops for  students and a science popularization education base for the public with local government support, according to Hao.Ayiguli Aishan, a local middle school student who had attended the workshop, told local media "I always thought that the robot and other high-tech products were far away from our lives. I didn't expect to see the robots, or even control the robots."