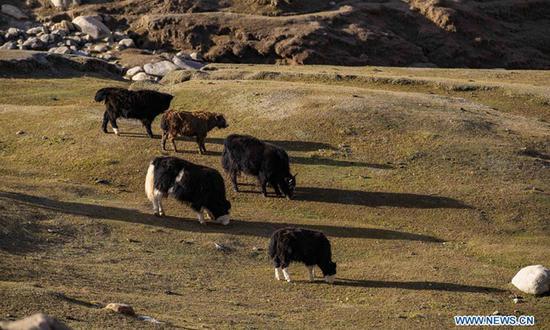 Herdsmen in Xinjiang have started to use the BeiDou positioning system, a domestically developed Chinese navigation satellite system, to remotely "graze" cattle and camels. The system's multiple functions enable herdsmen to monitor the real-time location and activities of the animals and find lost ones simply using a mobile phone.

The intelligent grazing system was introduced by the government of Northwest China's Xinjiang Uygur Autonomous Region and has been used by some herdsmen in a free trial in Urumqi Nanshan Pasture, Ili Kazak Autonomous Prefecture, Altay Prefecture and other parts of the region, according to a report from People's Daily.

The system's positioning function can locate the cattle and sheep that have a chip attached to their ears, and allow herdsmen to check where they are and what they do, all in their mobile phones through the network signal, which enables herdsmen to remotely "graze" their cattle without leaving their homes, giving them more time to cultivate plots of land to earn an extra income.

Wu Di, a scholar at the satellite positioning technology center of Wuhan University, told the Global Times on Monday that the BeiDou positioning system can identify the location of the chipped animals with a precision error of five meters when the field is wide and open. With trees or other shelters, the precision can be within 10 meters.

A herdsman in Qinghe county, Altay, was quoted as saying in a report by Nanfang Metropolis Daily on Saturday that herdsmen used to have to travel dozens of kilometers every day when looking for lost cattle in the past, which would cost tens of thousands of yuan in gas every year. The local government of Qinghe county started promoting the system in October 2020.

Wu noted that the navigation function of the system records the movement of the animals and provides direction and area for the herdsmen to find those missing cattle.

In Bohu county of Bayingol Mongolian Autonomous Prefecture in Xinjiang, more than 1,000 humped camels have been fitted with BeiDou satellite navigation collars, which enable herdsmen to remotely track the location and speed of a camel herd in real time using a mobile phone, according to the Xinjiang local report.

The technology effectively changed the traditional way of grazing camels for herders, as they used to live with the camels in the Gobi Desert and make arduous efforts to find lost ones every once in a while.

The camel herdsmen are also hoping to make use of the pedometer and temperature monitoring functions in the BeiDou satellite navigation collar to check the health of each camel, according to the report.

The use of the intelligent grazing system among herdsmen in Xinjiang is a sign of the increasingly high-quality lives that Xinjiang residents have been living.

Some people said on social media they were happy to see how high technology had made people's lives easier in Xinjiang, while others were concerned about how these Xinjiang stories would be twisted by Western media into "dark" news.

"I have one for CNN and BBC - 'China deprives Xinjiang cattle of their freedom to walk around,'" commented one netizen on Sina Weibo.

"Here is another - 'China uses brain-controlling chips with BeiDou to turn cattle into biological weapons,'" said another.