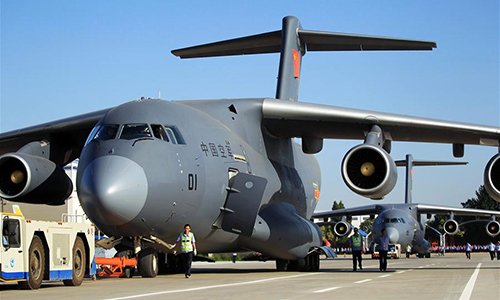 China's long-expected aerial tanker variant of the domestically developed Y-20 large transport aircraft will make its debut to the general public soon, and an aerial early warning (AEW) variant is also under development, making the Y-20 and its variants the pillars of the Chinese Air Force's strategic capabilities.

"The Y-20 cargo plane has variants like the Y-20 aerial tanker and Y-20 AEW aircraft. I believe that people will see our Y-20 aerial tanker debut on the battlefield in the not too distant future," Teng Hui, commander of an Air Force aviation regiment of the People's Liberation Army (PLA) Western Theater Command and a Y-20 pilot, said on China Central Television on Monday.

The Y-20's chief designer Tang Changhong said several times that there would be variants, and a prototype tanker variant of the Y-20 was spotted on commercial satellite photos by foreign media in 2018. It is widely expected that the tanker variant will work together with and eventually replace the very few imported Il-78 tankers and the domestically developed but less capable HU-6.

When repurposed for aerial refueling, the Y-20 will be able to carry about 90 tons of fuel, similar to the Il-78, and much more than the HU-6's capacity of under 30 tons, reported Ordnance Industry Science Technology, a Xi'an-based periodical on the national defense industry, in 2019.

It will greatly expand the PLA Air Force's operational range, allowing fighter jets and bombers to travel much greater distances, transforming the Air Force from a regional force into a strategic one, analysts said.

Compared to the tanker variant, less information is publicly available on the AEW variant.

China already operates the smaller, domestically developed KJ-200 and KJ-500 AEW aircraft, and the larger KJ-2000 AEW system, which is developed based on the frame of the Russian Il-76 transport aircraft.

The Y-20 is of similar size to the KJ-2000, but can use more advanced technologies to enhance its capabilities. For example, it may use a conformal radar array design to replace the traditional radome, which can increase the size of radars for better detection capabilities of hostile stealth aircraft, analysts said.

The Y-20 is an excellent basic platform for developing variants because of its large size and long endurance, a military expert who asked not to be named told the Global Times on Tuesday, noting that more variants, including electronic warfare aircraft, are possible.

By itself, it is a strategic cargo plane, and all of its variants can be of strategic value, the expert said.